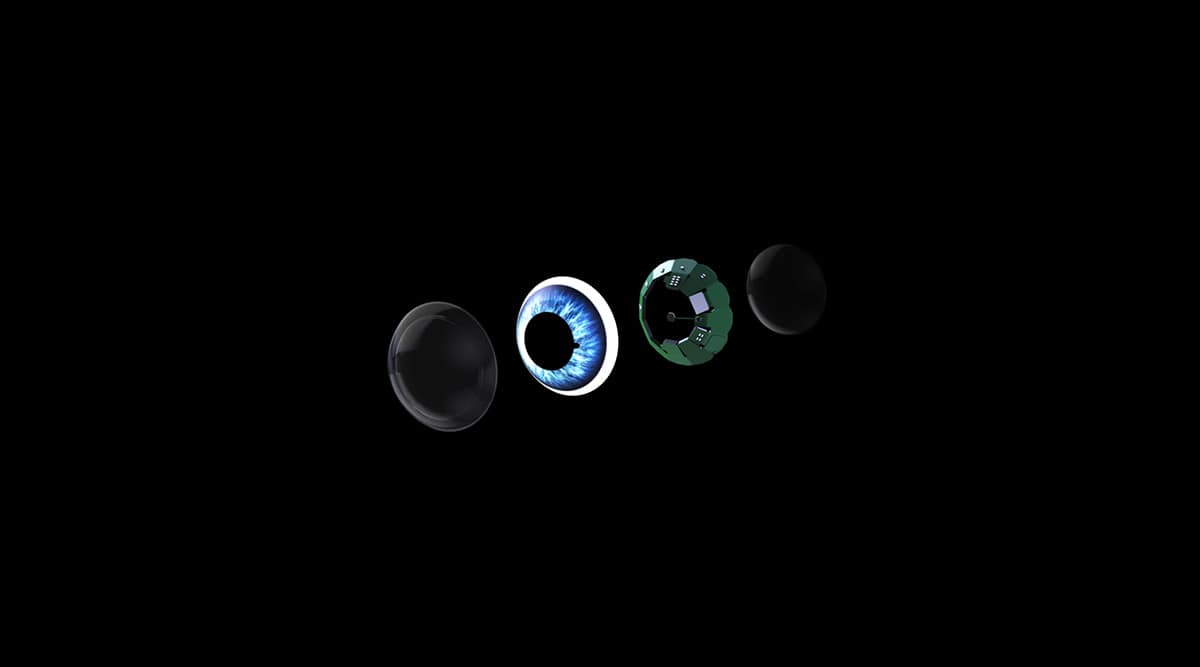 Walk down any street and it’s a familiar scene: people craning their necks as they look at their phones. But in the not-too-distant future we’ll probably just stare at digital information hovering over the world in front of us, taking in a blend of the digital and real worlds, all thanks to augmented reality. In an ordinary office block in Saratoga, California, dozens of engineers are working to realize that future, churning out prototypes on a weekly basis of a smart contact lens stuffed with tiny circuits, batteries and one of the world’s smallest displays.

When I visited Mojo Vision’s office in July, I held its augmented reality smart contact lens about an inch in front of my eye to try out its features, shifting a cursor around the space in front of me by moving the lens. Since I couldn’t wear the contact lens, I used a virtual reality headset to test its eye-tracking technology and demo apps, directing a small cursor by simply moving my eye. I could read from a digital teleprompter that displayed a series of words as I moved my eye, and I could also look around the room to see arrows pointing north and west, designed to help eventual users with navigation outdoors.

To “click” on one of the apps dotted around a circle that hovered in front of me, I simply looked at a small tab next to the app for an extra second. Numbers and text appeared in my upper field of view, showing, say, my cycling speed, or displaying the weather, or giving me information on an upcoming flight. To close the app, I’d look away from that information for a full second.

Technologists have talked for years about what the next computing platform will be, a decade after mobile devices replaced desktop computing as our primary gateway to the internet. Meta CEO Mark Zuckerberg is placing his bets on the metaversea fully immersive virtual world entered via a headset.

But I think the bigger shift will be to augmented reality, where glasses or contact lenses display information on the world around us so we can see both the online and real world at once. If there is one thing that humans love doing (albeit badly in many cases) it’s multitasking. Phones will become more like mini servers that coordinate all the different devices we’ll increasingly wear on our bodies: earbuds, watches and soon eyewear, the latest piece in the puzzle of invisible computing.

Mojo Vision’s lenses are a marvel in engineering and perhaps one of the most ambitious hardware projects in Silicon Valley today. The company had to develop its own chemicals and plastic compounds that would allow an eyeball to breathe through a lens covered with electronics. When I held the lens in my hand, it was noticeably thick, and large enough to extend beyond the iris to cover parts of the whites of the eyes.

The lens includes nine titanium batteries of the sort normally found in pacemakers and a flexible circuit narrower than a human hair providing all the power and data. A slightly convex mirror bounces light off a tiny reflector, simulating the mechanics of a telescope, which magnifies the pixels that are packed into just two microns, approximately 0.002 millimeters. From a few feet away, that tiny display looks like a pinprick of light. But when I looked through the lens more closely, I could watch a video of Baby Yoda, an image as crisp and engaging as any video I’d seen on a screen.

I could imagine people watching TikTok videos on this one day, but Mojo Vision wants the lens to have practical uses. The information it displays on your eye should be “very tight, fast, quick snippets,” said Steve Sinclair, senior vice president of product and marketing. Still, the company is figuring out “how much information is too much information,” according to Sinclair, who previously worked on the product team at Apple Inc. that developed the iPhone.

For now, Mojo Vision is working on a lens for visually impaired people that shows glowing, digital edges overlaid on objects to make it easier to see those objects. It’s also testing different interfaces with companies that make running, skiing and golfing apps for phones, for a new kind of hands-free display of activities. Sinclair says that barring regulatory holdups, consumers could buy a Mojo lens with a bespoke prescription in less than five years. That may be an ambitious timeline considering other augmented reality projects have been delayed or, like Google Glass, didn’t live up to the hype.

Google parent Alphabet Inc. also failed to deliver a smart contact lens for medical usebut overall, big tech firms have been driving much of the development around virtual and augmented reality. Apple is working on lightweight augmented-reality glasses which it plans to release later this decade, Bloomberg News has reported. Sometime next year, it is also expected to launch a mixed-reality headset, which it showed to its board of directors in May. Facebook currently dominates virtual-reality device sales with its Quest 2 headset, but it’s also racing to launch its first augmented-reality glasses in 2024, according to an April report in the Verge.

Why is augmented reality taking longer? Because it melds digital elements with physical objects in a view that is constantly moving. That’s a complex task that requires a lot of processing power. Even so, our desire to keep at least one foot in the real world means we’re likely to spend more time in augmented reality in the long run.

The big question is how to balance being present in real life while constantly seeing digital information. Today, it takes a few seconds to take out a phone, launch an app and carry out a task on its screen. In the future, we’ll be able to enter an app simply by looking at it for an extra second. That will throw up all kinds of thorny issues around addiction and how we interact with the world around us.

Sinclair says that same question came up for him years ago when he was working on the iPhone. “I can’t say how we at Mojo are going to completely mitigate that,” he said. “But the trend is moving in that direction, that people are going to have instant access to information.”

Whether with contact lenses or glasses, the human eye will point to a world swimming in more digital information than ever before. Our brains will have a lot to get used to.