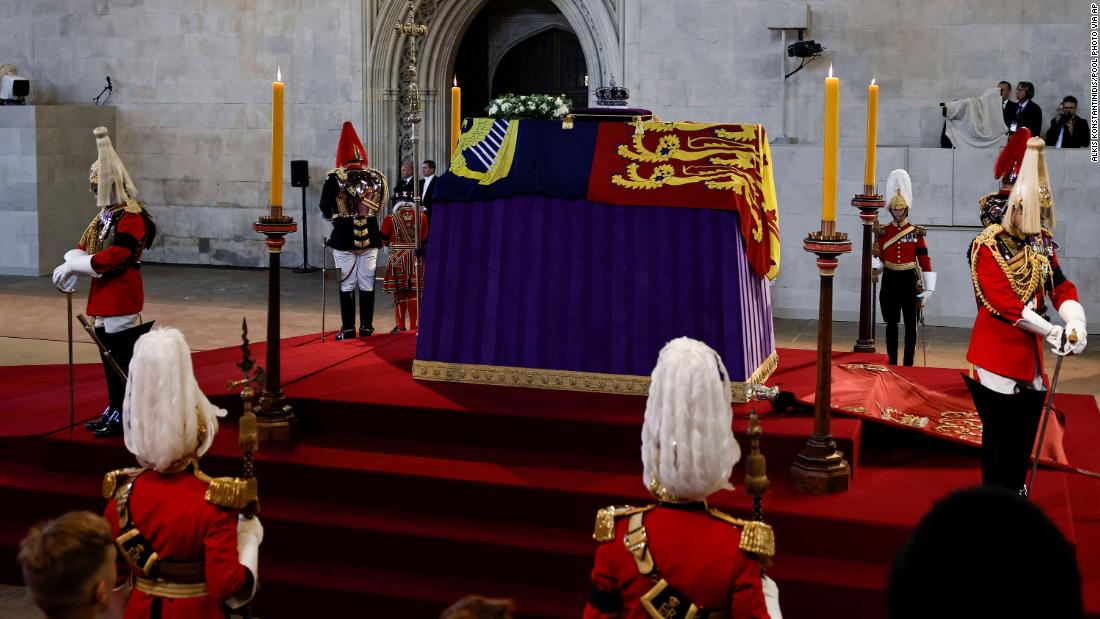 The meticulously planned arrangements are set to be a fitting farewell to Britain’s longest-reigning monarch, and will see King Charles III and members of the royal family walk behind the coffin once more as it is moved from the heart of the British parliamentary estate to Westminster Abbey for the hour-long service.

Speaking on behalf of the many agencies and departments involved in the funeral, the Earl Marshal, the Duke of Norfolk, said orchestrating the event was “both humbling and daunting.”

He added that it aimed to “unite people across the globe and resonate with people of all faiths, while fulfilling Her Majesty and her family’s wishes to pay a fitting tribute to an extraordinary reign.”

Heads of state, European royals and dignitaries from around the world will descend on the English capital to join the royal family in honoring the Queen’s life and unwavering service to the nation and Commonwealth next week.

While no official guest list has yet been published, invitations have been sent. US President Joe Biden was among the first to confirm his attendance at the event in London, where 2,000 people are expected.

The procession to Westminster Abbey

The palace outlined what to expect during Monday’s ceremonial events for the late monarch in a briefing Thursday.

On the day of the funeral at around 10:35 am (5:35 am ET), the coffin will be lifted from the catafalque where it has been resting by a bearer party founded by the Queen’s Company, 1st Battalion Grenadier Guards, and carried in procession from Westminster Hall to the State Gun Carriage of the Royal Navy, a senior palace official said.

In keeping with tradition, the gun carriage will set off at 10:44 am and be drawn by 142 Royal Naval Ratings, who are service personnel, according to the senior palace official.

It will then proceed on the short journey from New Palace Yard to Westminster Abbey, which will be lined by the Royal Navy and Royal Marines. The procession will be led by a massed Pipes & Drums of Scottish and Irish Regiments, the Brigade of Gurkhas, and the Royal Air Force with musicians numbering 200 in total.

The King, royal family members, and members of both households of the monarch and the Prince of Wales will follow directly behind the coffin.

For the journey, the coffin will be flanked by the bearer party, pallbearers found from service equerries to the Queen, in addition to detachments of The King’s Body Guards of The Honorable Corps of Gentlemen at Arms, The Yeomen of the Guard and the Royal Company of Archers.

The service will be conducted by Rev. David Hoyle, the Dean of Westminster, at Westminster Abbey, starting at 11 am (6 am ET).

Towards the end of the service, at around 11:55 am, the Last Post will sound before the two-minute silence is observed.

The state funeral will be brought to a conclusion by the Queen’s Piper, who at noon (7 am ET) will play a Reveille, the National Anthem and a Lament.

Following the state funeral, the coffin will be conveyed from the hall to Wellington Arch — again with King Charles III leading some members of the royal family on foot behind, while Camilla, the Queen Consort and others follow by car — before making its final journey out of London to Windsor.

Its destination: St. George’s Chapelwithin the grounds of Windsor Castle, where a committal service will take place at approx 4 pm (11 am ET), conducted by the Dean of Windsor. Prince Philip’s funeral service was also held there in 2021.

The Crown Jeweler will be present and, prior to the final hymn, will remove the Imperial State Crown, the Orb and the Scepter, which will later be returned to the Tower of London.

At the conclusion of the service, the Queen’s coffin will be lowered into the Royal Vault below the chapel.

A private burial service will be held for the family later, and the Queen will be laid to rest with her late husband of 73 years, Prince Philip, at the King George VI Memorial Chapel. Located elsewhere in St. George’s, it is where the Queen’s father and mother were also interred, and where her sister Margaret’s ashes remain.

A nation in mourning

Mourners have been queuing for hours for their chance to file past the Queen’s coffin in Westminster Hall and pay their respects. The line of visitors has been steadily growing since the doors opened to the public on Wednesday evening.

By Thursday lunchtime, the line extended about 4 miles (6.4 kilometers) along the River Thames past Tower Bridge, according to an official tracker.
Buckingham Palace also said that Queen Elizabeth II’s children would mount a vigil around her coffin on Friday evening, similar to theirs guard in St. Giles’ Cathedral in Scotland earlier this week.

King Charles III will be joined by Princess Anne and Princes Andrew and Edward around the coffin.

The palace also revealed that the King will host a reception for visiting heads of state at Buckingham Palace on Sunday, ahead of the state funeral.

To get updates on the British Royal Family sent to your inbox, sign up for CNN’s Royal News newsletter.