Despite job gains and signs of easing inflation, six out of 10 Americans think the nation’s economy is in a recession, according to the latest poll from the PBS NewsHour, NPR and Maristand more than half think President Joe Biden has weakened the economy.

As the country gears up for midterm elections that will determine who controls Congress, how people view the country’s economic outlook seems to be shaped not just by confusing or conflicting indicators, but also by politics.

A majority of Democrats and Biden’s 2020 voters don’t see a recession; everyone else seems to disagree. Most Republicans and independents say US economic growth has slumped, and that impression holds for a majority of people in nearly every other demographic group. Comparable levels of economic pessimism haven’t been seen since March 2013 under the Obama administration, as employers cut back on employee health benefits as parts of the Affordable Care Act began to take effect and the nation’s GDP was lackluster.

In recent months, people likely still wince from the sting of historic inflation, the Fed’s decision to raise interest rates and the sluggish stock market – all of which raised serious concerns not so long ago about how much more the nation’s economy could take.

There’s also striking evidence to combat that pessimism. The nation’s job market has recovered nearly 17 million jobs lost during the coronavirus pandemic, according to the Bureau of Labor Statistics. The jobless rate hovers above 3 percent – down from a record high of 14.7 percent in April 2020. Americans who earn the smallest paychecks saw wage growth that, for many, offset higher costs of living. And COVID relief in the forms of child tax credits, eviction moratoriums and aid went to people directly, rather than only to businesses, said Darrick Hamilton, professor of economics and urban policy at the New School for Social Research.

Unlike the days of the Great Recession, when policymakers bailed out banks and businesses as people lost their homes and jobs, Hamilton noted that money has gone “directly to people” to ease pandemic-driven losses. But inflation has reshaped how people perceive those gains. They feel their dollar doesn’t stretch as far as it once did when they buy groceries or go to pay their bills.

This didn’t happen overnight, Hamilton explained, but after decades of racist and classist policies. “The most wealthy amongst us has accrued a lion’s share of whatever productivity gains are in the economy,” he said. “It manifests in a level of disparity we haven’t seen since the Gilded Age that preempted the Great Depression.”

What matters to voters now

In this latest hole, 30 percent of Americans said inflation would be their priority when they vote in November. Republicans, independents and white men who did not graduate from college are most likely to name it as their top issue.

Falling gas prices suggest inflation may be easing and, overall, economic worries have softened since July, when 37 percent of US adults ranked price hikes as their biggest voting issue. But significant relief may not arrive or change the narrative before elections in two months. 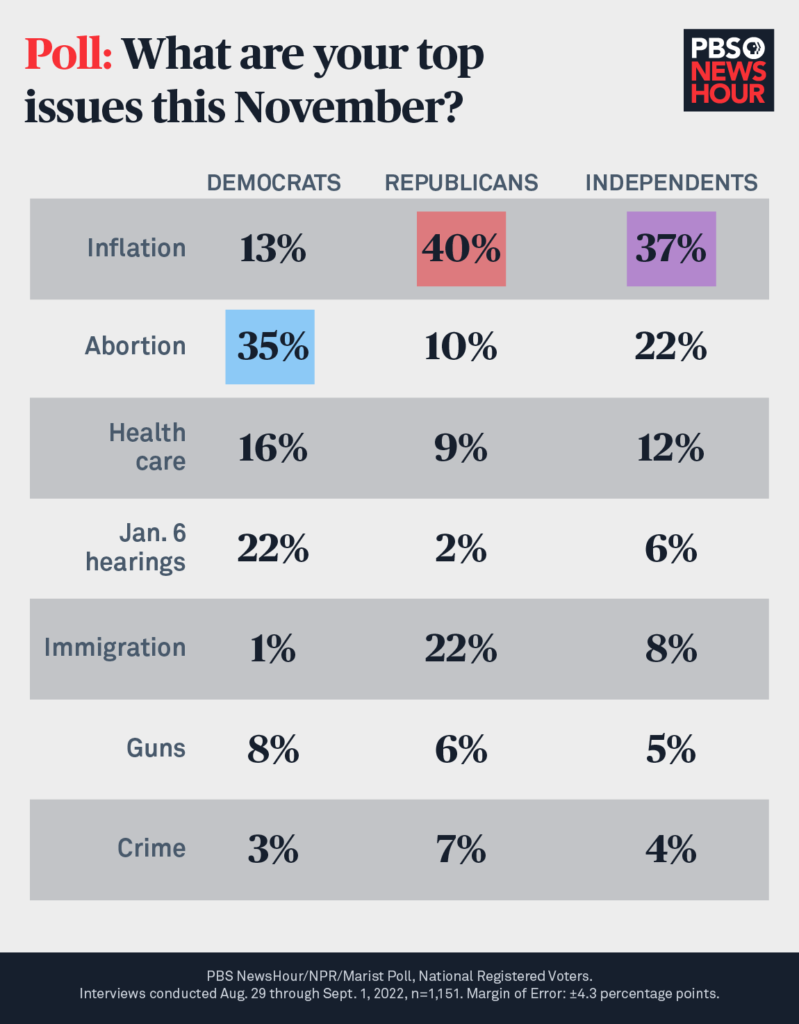 The economy is also not the only priority for voters.

One out of five Americans — 22 percent — say abortion is of utmost importance when they vote in the midterms. That includes 35 percent of Democrats and 39 percent of white women who graduated from college.

What’s more, six out of 10 Americans said the Supreme Court’s decision to overturn Roe v. Wade makes them more likely to vote this fall. Statistically, that attitude hasn’t faltered since shortly after the court issued its final opinion in Dobbs v. Jackson in June.

Overall, another 13 percent of Americans said health care will be top of mind for them.

One out of five Democrats said they are motivated by the Jan. 6 committee hearings that are investigating the attack on the US Capitol and the role former President Donald Trump and his administration played in that deadly day. Just as many Republicans are concerned about immigration.

Confidence in President Joe Biden’s economic leadership has fallen since July 2021, according to this latest Marist poll. Fifty-seven percent of US adults say his decisions weaken the economy, including nearly all Republicans, 63 percent of independents and 76 percent of white people who didn’t graduate from college. That’s worse for Biden by 12 percentage points compared to over a year ago. 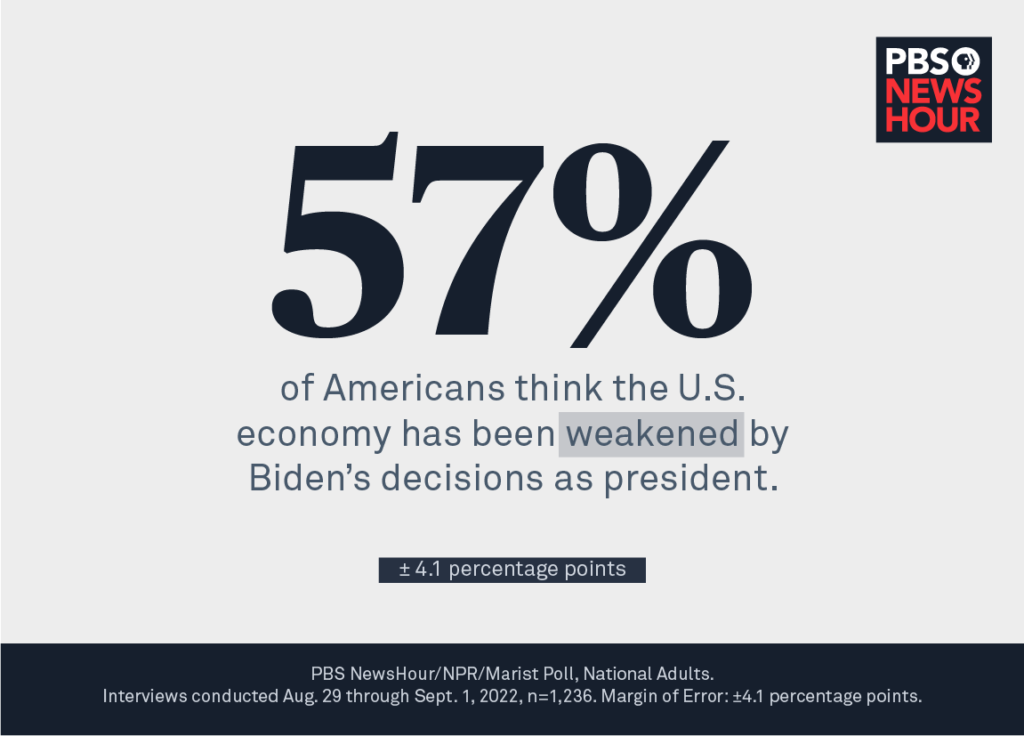 Approval of Biden overall has improved slightly at 41 percent, inching up 3 percentage points in a few weeks.

WATCH: How Democrats coalesced around the Inflation Reduction Act

If Americans feel Biden is not serving them well on pocketbook issues, is anyone doing better? Thirty-nine percent of the public thinks Republicans do a good job of dealing with the economy. Fewer Americans — 26 percent — felt the same way about Democrats. One out of five Americans said neither party does a good job of leading on economic issues.

While there is much in history to suggest that Democrats could suffer at the ballot box, feelings about a president’s economic stewardship does not always dictate fate. In 2018, Americans felt more optimistic about the economy under Trump, who received relatively high approval for his economic leadership, according to Marist polling data. But as Amy Walter, publisher and editor of the Cook Political Report, said, “Many of those same voters ended up supporting Democrats” because they did not like how Trump behaved or conducted himself as president.

Today, a majority of Americans feel the country is already in a recession and trust Republicans more than Democrats to steer the nation’s economy back towards growth, Walter said. And yet, Democrats still hold a tenuous lead on the generic ballot.

MORE: WATCH: 2 economists on where the US economy is headed now

Support for Democrats has held steady at 48 percent since earlier this summer, but Republicans are gaining momentum. If the November elections were held today, 44 percent of national registered voters said they would vote for Republicans, up three percentage points since June.

With Democrats touting their accomplishments, from passing major legislation to lower prescription drug costs to helping families during the pandemic, Walter said the midterms are far from over: “The question is: Do voters give them credit for that? Or do they say, ‘It’s not enough, and we think Republicans can do better’?”