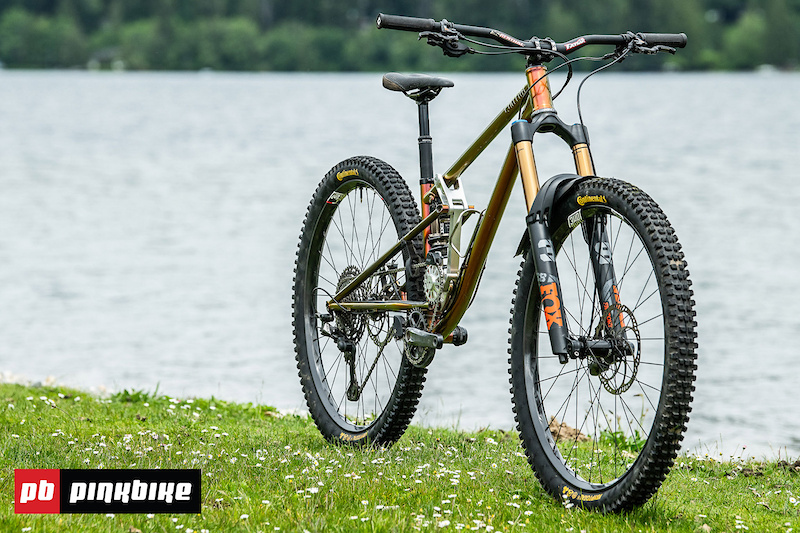 Words by Mike Kazimer; photography by Dave Trumpore
The Contra MC (MC stands for Magic Carpet) is the home brewed creation of Evan Turpen, a former pro downhill racer and mechanic who taught himself how to use engineering software in order to create bikes that matched his needs.

The MC is aimed at the enduro / gravity crowd, with 29” wheels and 164mm of rear travel paired with a 170mm fork. The frame is a sight to behold in person – it has sort of a steampunk vibe to it thanks to the skinny steel tubes paired with shiny machined aluminum links and a large idler pulley.

The MC’s suspension design gives it an axle path that moves the wheel rearward 22mm over the course of the travel. The idler pulley wheel is fairly large, a conscious design decision that was made to help reduce the amount of drag in the system – with a larger pulley wheel the chain doesn’t have to make as sharp a bend on its way around. Seb Stott’s First Look article does a great job explaining exactly how the dual-link suspension design works – you can check that out here.

For such a small company Evan has hit the ground running, and will be offering the MC in 6 sizes, from XS to XXL, with reach numbers ranging from 420 – 520mm in 20mm increments. The smaller two sizes get 27.5” rear wheels (the XS has 27.5” wheels front and rear), while all the rest run full 29” setups.
As far as geometry goes, our size large test bike had a head angle of 63.5-degrees, a seat tube angle of 78-degrees, and a 480mm reach. The chainstays measured 438mm, a number that varies depending on the frame size – they grow by 6mm as the sizes increase.

With a steel frame, a high-pivot suspension design that delivers 164mm of travel, and a build kit that’s skewed towards the gravity-oriented end of the spectrum it’s not entirely surprising that this ended up being the heaviest bike we had on test, tipping the scales at 37.2 pounds.

The Contra is only offered as a frame and shock only; the frame with an EXT Story is priced at $4,500 USD. That’s certainly on the higher end side of things, but keep in mind the frame is handmade in California.

The Contra’s weight can’t be overlooked, but judging this steel machine by that one figure would be doing it a disservice. The actual pedaling performance was quite impressive – that big EXT coil shock remained remarkably unfazed by weight shifts during climbs, with minimal bobbing even during out of the saddle effort.

The overall position is comfortable and upright, thanks to the steep 78-degree seat angle. I did end up going with a 40mm stem versus the 35mm stem it was supplied with, and while 5mm may not seem like much, that increase helped calm down the steering a touch while climbing and descending.

Compared to the other bikes on test, I’d put the Contra in the same realm as the Commencal Meta SX. Both have pedaling positions that work well for sitting and spinning up steep climbs, but neither one feels particularly energetic – they’re calm cruisers through and through. The Contra did offer a little more traction than the Meta SX on rougher, chunkier climbs, likely due to a combination of the larger rear wheel, high pivot suspension design, and coil shock.

Compared to the Deviate Claymore, the other high pivot bike in this field test, the Contra has more subdued climbing manners. The Deviate’s head angle is a bit steeper, and it weighs a couple pounds less than the MC, factors that make it a bit easier to handle on tighter, slower speed climbs.

As far as noise and drag from the idler goes, the MC remained refreshingly quiet despite being subjected to a whole bunch of mud and grit. High pivot bikes do require a more frequent application of chain lube – that’s key to keeping any chain noise to a minimum.

The Contra possesses a sense of calm that brings to mind the way it feels to ride with a full-face helmet versus a half shell. With a half shell, the wind and trail noise are clear indicators of how fast you’re going. With a full face, those indicators are muffled, making it easier to go even faster. That same sensation prevails with the Contra MC – it muffles the trail in such a way that letting off the brakes and plowing straight ahead usually seems like the best course of action. The EXT Storia coil shock has excellent bottom-out resistance, which made it easy to chuck the Contra MC into rough sections of trail and trust that everything would be all right.

I wasn’t surprised to get my fastest timed lap on the Contra, and Matt Beer had the same experience. This is a bike that comes alive at higher speeds and on rougher trails, with loads of traction that keeps the rear wheel glued to the ground no matter how slimy the conditions are. That stuck-to-the-ground feeling doesn’t mean it can’t jump, though, it just means that it feels most at home on bigger hits rather than hopping and popping over little mid-trail hits. It would make a great park bike, especially for riders who like to mix it up, hitting chunky DH tracks one lap and floaty jump lines the next.

On slower speed, steep trails it remained manageable, although there were a few times I had the sensation that there was a slight disconnect between the handling at the front of the bike versus the back. It’s hard to accurately put into words, but it was almost like it took longer for the rear end to respond to steering inputs. The rear wheel does get further away as the bike goes through its travel, although I haven’t experienced anything quite like this on other high pivot bikes. I wouldn’t necessarily call it a negative trait, but it was different from what I’m used to.

I’d classify the Contra as the most gravity-oriented bike out of this bunch, followed closely by the Commencal Meta SX. They’re long, slack machines that have a fiendish appetite for steep, rough trails, and can feel a little underwhelming on mellower terrain. That’s different from the Fezzari La Sal Peak or the Santa Cruz Megatower, bikes that are lighter and livelier on a wider range of trails.

Would the Contra make a good enduro race bike? That depends. I can see it doing well somewhere like Whistler, where the stages are rough and on the steeper side, without too many really tight turns. It’s less well suited to tighter, more awkward tracks, where its weight and ground-hugging nature would make it more of a handful.

Over the course of the test period we did notice a few paint scuffs showing up where the cranks get close to the chainstays. As mentioned, it was muddy most of the time we were on the bike, but no matter what the crankarm to chainstay clearance is pretty tight – it’d be nice if there was a little more room to keep dings and chips from appearing. According to Evan Turpen, production frames will be powdercoated, which should greatly improve the paint durability, and a change has been made to the chainstays to allow for a tighter radius bend, increasing tire, heel, and chainring clearance.