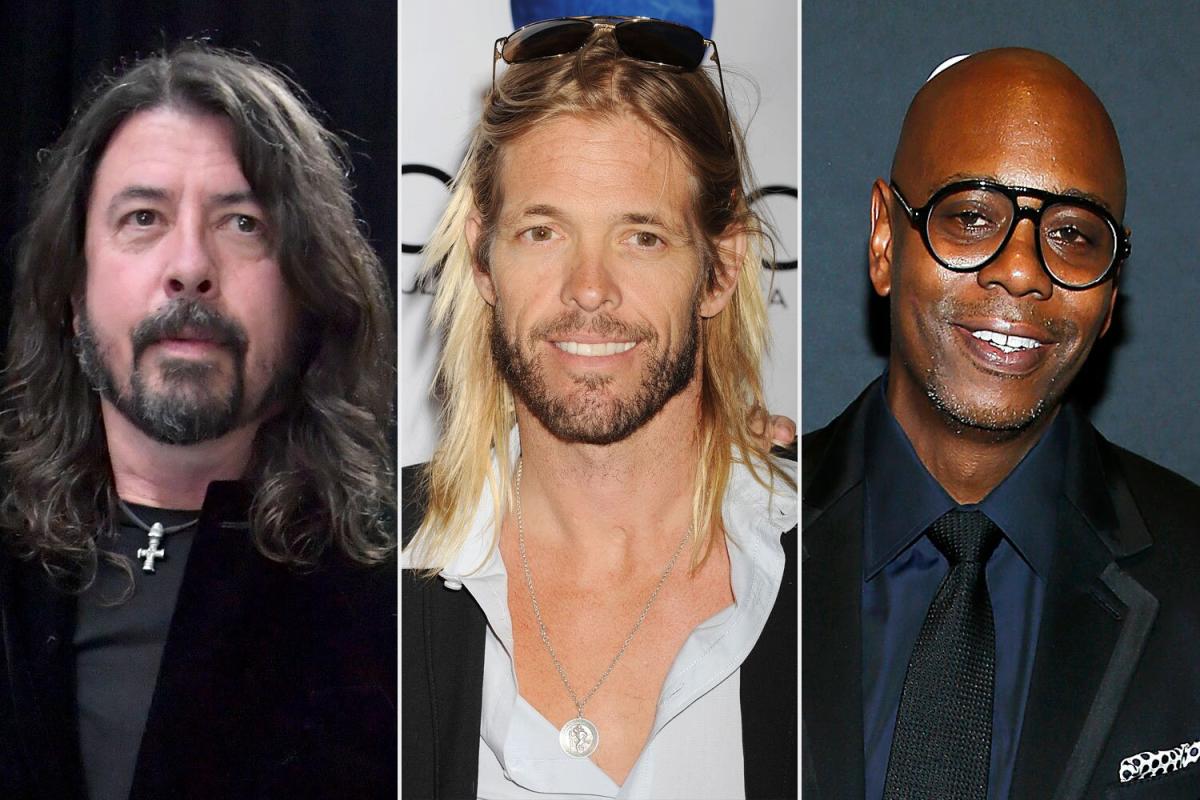 The late Foo Fighters drummer, who died unexpectedly while on tour in Colombia in March, was celebrated by his close friends, family, and fans at the first of two tribute concerts in London’s Wembley Arena on Saturday. A second concert will be held stateside at the Kia Forum in Los Angeles on Sept. 27.

Arm in arm, the Foo Fighters opened the event with a poignant speech delivered by the frontman Dave Grohl.

“Ladies and gentlemen, tonight we’ve gathered here to celebrate the life, the music, and the love of our dear friend, our bandmate, our brother Taylor Hawkins,” he said. “For those of you who knew him personally, you know that no one else could make you smile or laugh or dance or sing like he could. And for those of you that admired him from afar, I’m sure you’ve all felt the same thing.”

“So tonight, we’ve gathered with family and his closest friends, his musical heroes and greatest inspirations, to bring you a gigantic f—ing night for a gigantic f—ing person,” Grohl continued. “So, sing. And dance. And laugh. And cry and f—ing scream and make some f—ing noise so he can hear us right now. ‘Cause you know what? It’s gonna be a long f- –ing night, right? Are you ready?”

The group were then joined on stage by Liam Gallagherwho performed the Oasis hits “Rock ‘N’ Roll Star” and “Live Forever.”

In an audio message played during the event, rock legend Stevie Nicks read the tribute she penned for Hawkins back in March in which she recalled joining the Foo Fighters for a jam session. “We recorded a kickass version of ‘Gold Dust Woman’ live, and at the end of the song I yelled out, ‘best “Gold Dust Woman” ever!” And I meant it.”

Sudeikis made multiple appearances throughout the evening, including to introduce Supergrass to the stage, whom he recalled opened for the Foo Fighters when the Ted Lasso star saw the band in 1997. “It was also the first time I got to see Taylor Hawkins perform live,” he said.

During the event’s star-studded lineup — which also included performances by Wolfgang Van Halen, Rush, and the Pretenders — Dave Chappelle took to the stage to remember Hawkins as both a musical legend and a family man. The comedian recalled meeting the Foo Fighters while hosting Saturday Night Live back in November 2020, when he told the band that his go-to karaoke song is Radiohead’s 1992 hit “Creep.”

“Dave Grohl called me and asked me to sing ‘Creep’ with them at Madison Square Garden,” Chappelle said. “I had smoked some reefer, so I had agreed to do it.”

It was at the concert that Chappelle met Hawkins’ son, Shane Hawkins, who was sitting on the side of the stage at the gig, for the first time. “I’ve seen Taylor be a rock star many nights, but it was my first time seeing him be a dad, and what a cool f—ing dad,” he said. “Taylor Hawkins was a legend of a man. He was a legend of a musician and he’s a legend of a father.”

Billie Eilish and her brother Finneas O’Connell — who honored Hawkins during their performance at the Grammys in April — called Hawkins “one of our heroes” in a video message. “Taylor’s music and his passion will be remembered forever and ever,” Eilish said. “So should his warmth, his kindness, his generosity with every single person that was ever lucky enough to meet him. We miss you, Taylor.”

Elton John recalled talking with Hawkins after one of John’s concerts, saying, “He loved music. He loved playing. He loved the Foo Fighters.”

In a video message, Red Hot Chili Peppers drummer Chad Smith shared one of his favorite stories about Hawkins. According to Smith, Hawkins would often pop over to a local Guitar Center near their recording studio and spend time with “little kids” and “wannabe drummers” in its percussion section.

“One day, the manager came to the guy who ran the percussion section and he said, ‘You know, I think something’s going on with Taylor Hawkins’ credit card. There must be some fraud or something because I see thousands of dollars over months of charges and I’ve never seen Taylor buy anything ever here.'”

Smith then revealed that Taylor had been purchasing “drum equipment, drum sets, sticks, cymbals,” and more for the kids at the store. “He knew how important it was to have good equipment, and he would just buy it for them and never tell anybody,” Smith said. “That’s the kind of guy Taylor Hawkins is.”

Later in the show, a teary-eyed Grohl became choked up on stage as he discussed the band’s mindset while creating the mega-concert for their beloved bandmate. “The last few days, we’ve been asking ourselves the same question after every rehearsal,” he said. “We’re like, ‘God, I wonder what Taylor would think of this. I wonder what Taylor would think to see all of these amazing people together making music.'”

Rock legend Brian May led the crowd into a rousing rendition of Queen‘s “Love of My Life” in honor of Hawkins, who was a longtime fan of the band and frequently covered their songs on tour. “In 1992, exactly 30 years ago, we said goodbye to Freddie [Mercury, former Queen frontman] in a style similar to this,” May said before the performance. “So I know that Freddie would be very happy to use this song to honor Taylor Hawkins.”

The Foo Fighters closed out the evening by playing a medley of their hits — including “Learn to Fly,” “Best of You,” and “Times Like These” — with a rotating cast of drummers, including Blink-182 rocker Travis Barker, Rufus Taylor, and 12-year-old Nandi Bushell.