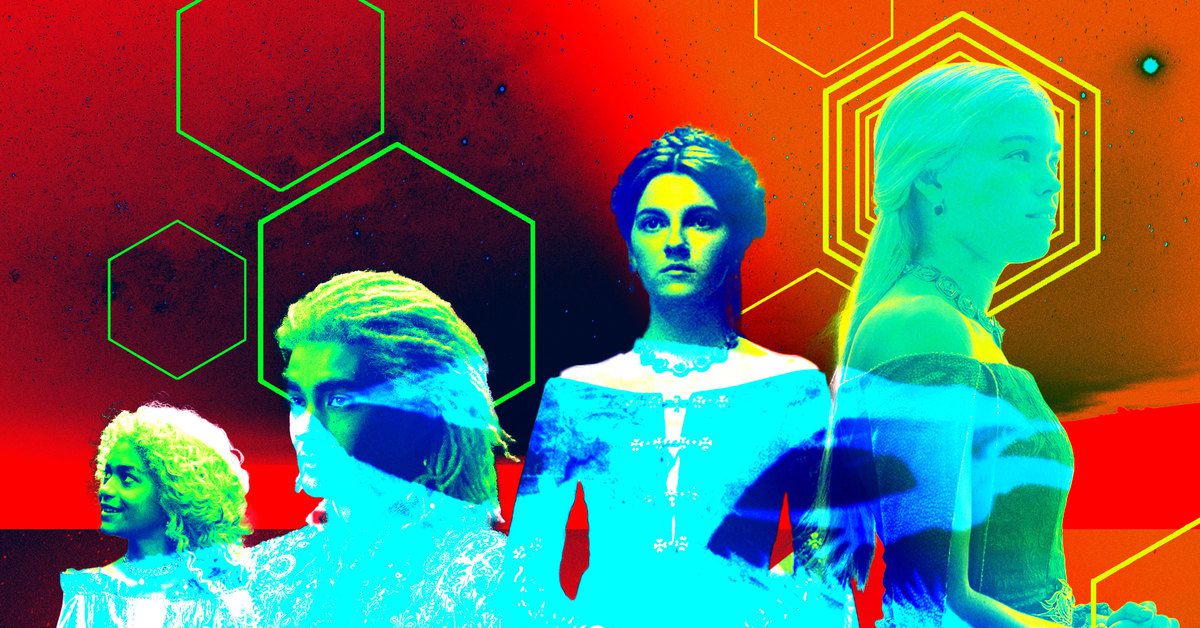 When House of the Dragon next returns, many of its stars will be missing.

The teaser for the next episode picks up some 10 years after the closing scenes of the fifth chapter, “We Light the Way,” in which yet another royal wedding went awry in Westeros. But a decade after the rushed nuptials of Rhaenyra Targaryen and Laenor Velaryon—with the heir to the Iron Throne forced into the match after being ensnared in scandal by her ever-plotting uncle, Daemon, and her groom wiping away tears for his just-murdered lover, Joffrey Lonmouth—it’s not just the cast’s wigs that have changed.

Through Dragon‘s first five episodes, which spanned the roughly three and a half years following the death of Rhaenyra’s mother and newborn brother, the adolescent princess was played by Milly Alcock, and Emily Carey costarred as Alicent Hightower, her onetime best friend—and now King Viserys’s second wife and mother to rival royal claimants. Now barreling towards the old age of—egads—30, the pair has been swapped for Emma D’Arcy and Olivia Cooke, respectively. Laenor, who already saw a switch from Matthew Carver to Theo Nate after the series’ second episode, will now be portrayed by John MacMillan; his sister, Laena, once presented as a child to Viserys as marriage material, is now the decidedly adult Nanna Blondell. Other actor swaps abound: Some of the early episodes’ young children—most notably Aegon, Alicent’s firstborn and would-be heir—have grown up, and still have additional recasts looming. Many others—some with their own wee dragons, and not all with the hair color that their parents’ marital vows would seem to have promised—have since arrived.

That Alcock, Carey, and the others’ time on House of the Dragon was limited was never a secret. But it’s a strange proposition nonetheless. Halfway through its inaugural season, HBO’s first dip back into the Game of Thrones IP well has been a clear success, drawing both critical praise and record audiences. It’s curious, then, to have the show send off two of its leads—one-half of the core four, as my colleague Zach Kram recently dubbed them. (The other two, Matt Smith as Daemon and Paddy Considine as Viserys, will hang on to their roles, at least for as long as the poor leprous king still has enough body parts to be portrayed at all.)

It’s hard to know how much of the series’ early success can be laid at Alcock’s and Carey’s feet, but we may soon find out. Alcock was the one tasked with painting Rhaenyra as the willful, impulsive, and sometimes unsympathetic princess who complicates the viewer’s rooting interests in the succession shuffle. She loved her mother—yet she doesn’t hesitate to swear falsely on her memory that she has remained chaste. She offers Laenor a practical pitch for marriage that would allow him the freedom to continue his relationship with Joffrey—yet openly pitches elopement to Daemon at her and Laenor’s de facto rehearsal dinner. She seems to feel genuine attraction to Ser Criston Cole, whom she tempts into her bedchamber—yet cares not at all when he lays out how miserable breaking his Kingsguard vow of chastity has made him. She was Alicent’s best friend and has perhaps the best understanding of anyone in the realm of the powerlessness that being a woman in a society run by men can entail—yet refuses to extend her either sympathy or kindness after she weds Viserys, even as Alicent hints at the isolation and indignities that her queenly duties have required of her. She knows the chaos that will transpire should she falter in her path to the Iron Throne—yet flouts her father’s guidance and orders whenever she wishes.

Those, of course, are just the facts of Rhaenyra as a character. It fell to Alcock to flesh them out, maneuvering from clenched-jaw stubbornness to cocky brinksmanship to wild-eyed laughter as she dove into some new reckless adventure—often in the space of a single episode. “I’m right here, Uncle,” she said coolly to an actively-in-revolt Daemon with a dragon coiled behind him and her late brother’s precious dragon egg in his arms. “The object of your anger. The reason that you were disinherited. If you wish to be restored as heir, you’ll need to kill me. So do it.” When he backs down and tosses her the egg, the wry smile that creeps across her face says still more.

Carey, too, infused Alicent with an emotional depth forged in small gestures, from nervous nail-picking during her father-commanded courtship of Viserys to the careful quiet of her later exchanges with her husband and his daughter. Time and again, she sought to steer them with her compass—one anchored much more forcefully in rules, duty, and trust than the heir to the throne’s. Carey’s final act as Alicent may well be her tardy arrival at Rhaenyra’s wedding festivities clad in a gown of Oldtown’s wartime green at the end of “We Light the Way,” midway through the king’s speech. After a half-season of timid kindnesses, little glances, and fidgets, her fury at both Viserys and Rhaenyra felt earned.

House of the Dragon is far from the first show to phase out actors for more age-appropriate performers as its characters grow older. The Crown, for one, will use a third set of actors for its fifth season this fall as it continues to chart the life of Queen Elizabeth II. Notably, Smith appeared as Prince Philip in the first and second seasons; he was succeeded by Tobias Menzies, who has since passed the role on to Jonathan Pryce. Each transition has felt bittersweet. And yet pitfalls lurk within the opposite creative choice, as well: For all the fan adoration of the stars of shows like Outlander and For All Mankindthose series—having moved decades past their starting points with the same central cast—now regularly feature cringeworthy moments wherein a dubious gray streak of hair or an elaborately faked limp by a still-youthful actor disrupts the story.

The scope of the Dance of the Dragons—the succession crisis at the heart of House of the Dragon—goes on for years yet, and D’Arcy, Cooke, and the rest of the newcomers enter a tightly plotted story with the budget to make all those dragons come to life. They may well dazzle just as their forebears did, with a story richer in both progeny and, presumably, peril.

And if they don’t succeed—well, who says no to a prequel to the prequel?