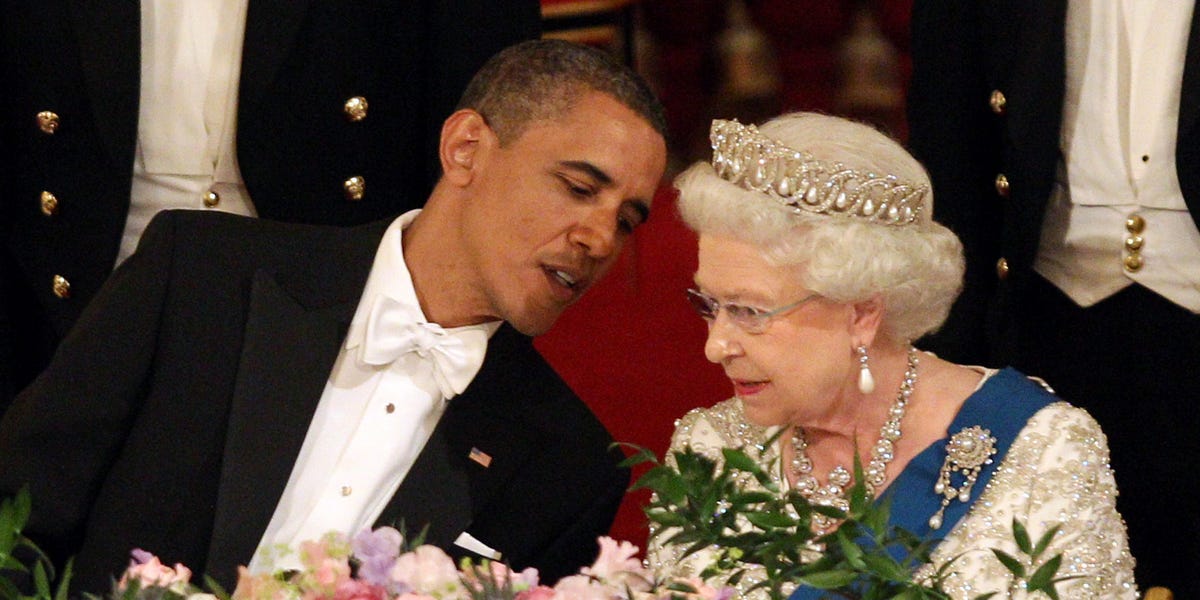 In her 70 years on the throne, Queen Elizabeth II met 13 US presidents. But there was one that she took a special shine to.

In his bookKensington Palace: An Intimate Memoir from Queen Mary to Meghan Markle,” author Tom Quinn wrote, “after meeting Barack Obama whom she completely fell in love with – she has frequently asked her courtiers if they could arrange for him to come to Britain now he is no longer president.”

The pair got off to a great start when President Obama gave the Queen a gift when he met her for the first time in April 2009 when Obama touched down in the UK for the G20 summit.

At the Inbound conference in BostonObama reminisced that the present for the Queen was an eyebrow-raiser.

“When you meet with leaders, you exchange gifts. You never want to be out-gifted! I wanted her actually to be able to use the gift. She loved British Broadway Showtunes, and the iPod had just come out. I thought, let’s get an iPod and fill it with British show tunes. The British tabloids thought it was entirely inappropriate, but I think she used it quite a bit,” the former President said.

It set the tone for a relationship that would transcend the rigid parameters of the protocol which the Queen would often forgo royal protocol and focus on deepening and enjoying their relationship.

Obama recalled another touching and revealing anecdote about the Queen at the Inbound Conference. During his second year in office, his two daughters and his mother-in-law made a trip to London.

There was no plan to visit the Queen, but they unexpectedly received an invitation to tea at Buckingham Palace.

“And so, I’ve got Malia, who at that point is eleven, Sasha who is eight, and my mother-in-law, who was a stay-at-home mom and a secretary for a bank–who lived on the south side of Chicago her whole life, sitting there with the Queen of England. And then she insists that the girls take her golden carriage, which I guess she uses for jubilees, on a long drive through the Palace grounds.”

Obama said the Queen was genuine and gracious. “None of this was ever reported. It was just something that she did quietly,” the former president said.

And writing in her book Becoming, Michelle Obama recalled an intimate encounter with the Queen during their final state visit to England in 2016.

The plan was to fly by helicopter from the US ambassador’s residence in London to Windsor Castle, one of the Queen’s residences. From there, Prince Philip and the Queen were going to meet them on the estate, and then Philip would drive them all back to Buckingham Palace.

This event was significant, not just because of the passengers of the car, but because this would have been one of the only times the Obamas drove without secret service agents. As such, the journey was planned to the finest detail.

The Queen, however, did not want to go with that well-made plan and asked Michelle Obama if she would like to ride with her in her Land Rover.

Obama wrote: “I froze, trying to remember if anyone had prepared me for this scenario, whether it was more polite to go along with it or to insist that Barack take his proper seat by her side.

“The Queen immediately picked up on my hesitation. And was having none of it.

“‘Did they give you some rules about this?’ she said, dismissing all the fuss with a wave of her hand. ‘That’s rubbish. Sit wherever you want.'”

The close relationship between the monarch and the Obama family did not mean that the Queen would not assert her own needs, however.

Former Chancellor of the Exchequer George Osborne said the Queen once asked him at a state banquet to tell then-President Obama to leave because it was late and she wanted to go to bed.

Indeed, in a tribute to the Queen filmed for the BBC, the 44th President confirmed the monarch was a straight-talker. “She was very mindful of her guests at Buckingham Palace not overstaying their welcome. She was looking at her watch and at some point said, ‘ok, it’s time to go,'” he laughingly recalled.

Upon hearing the news of the death of the Queen, President Obama and the former First Lady said“Like so many, Michelle and I are grateful to have witnessed Her Majesty’s dedicated leadership, and we are awed by her legacy of tireless, dignified public service. Our thoughts are with her family and the people of the United Kingdom at this difficult time .”