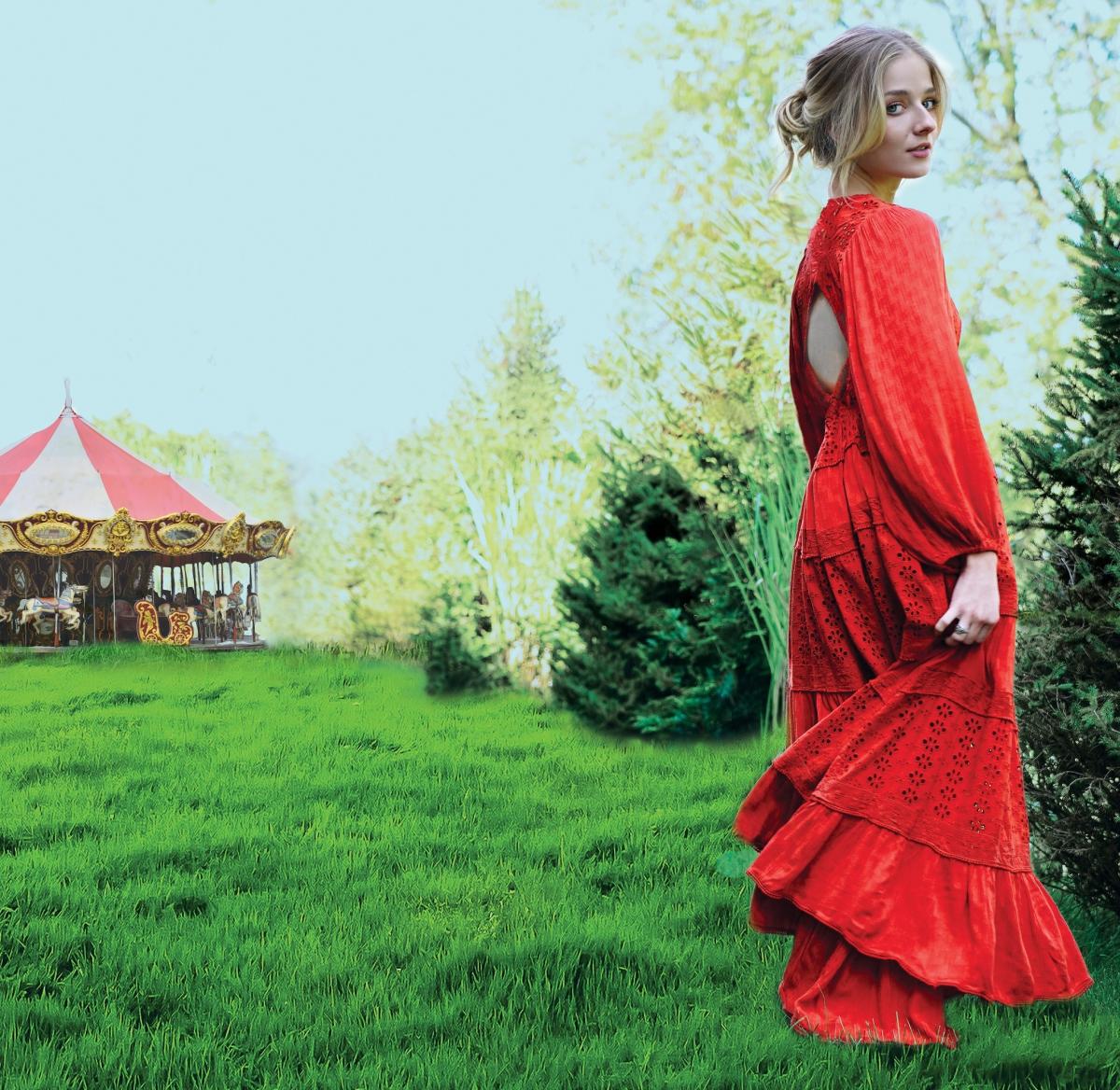 Classical-crossover prodigy Jackie Evancho first came to international attention at age 10, when she competed on America’s Got Talent Season 5. She became an instant sensation, with her holiday EP O Holy Night establishing her as the best-selling debut artist of 2010, the youngest top 10 debut artist in Billboard history, and the youngest solo artist ever to go platinum in the US However, as she matured amid the glare of the public spotlight, she struggled, both personally and professionally, developing an eating disorder at age 15.

While the opera/pop singer tells Yahoo Entertainment that her physical recovery is still very much in progress, Evancho, now age 22, seems to be finding her voice — and part of that process is interpreting the songs of one of her chief childhood influences, Joni Mitchell, on her lovely new covers album Carousel of Time, out Sept. 9.

Evancho clarifies that her personal ordeals did not influence the Mitchell “story-songs” she gravitated towards when assembling the tracklist. “Honestly, at the time that I had decided to do the album and pick the songs… the trauma stuff, I repressed that a lot, and it wasn’t even at the front of my head,” she says. However, making the album has helped her healing process during the past two years.

“I think the thing that really broke it for me was in 2020,” Evancho reflects, as she opens up about her anorexia. “I kind of had a break — like a snap, in a way. And I was a nervous wreck. I was shaking all the time. I couldn’t keep anything in my stomach, just from sheer nausea and panic. And that started a whole journey of going to outpatient or inpatient and being treated for all these things that were building up that I was ignoring. And after I got out, I was like, ‘Look, I can’t keep living like this. I’m not the same person I was when I was 10. And I can’t keep pretending, because it’s making me sick.’ So, I kind of said, for lack of better wording, ‘Screw it. I’m going to be myself. I’m going to go out there. And if people don’t like me, they don’t like me. I can’t please everybody, but I can be myself because there’s no way I can feel ashamed at the end of the day.’ If I could say to myself, ‘Well, at least you were honest.'”

While November 2020 marked a breaking point for Evancho, she says her anorexia was “slowly bubbling since I was 15.” At that time, she was developing from the adorable Christmas angel who won the hearts of millions of people AGT viewers into a mature singer-songwriter. “I know that I was at a point where I was becoming a woman and I wanted to be this specific version of myself, and I would say that a lot of my eating problems come from pressure I put on myself — not society’s pressures, not anybody else’s putting it on me,” she explains. “It came from myself, because I’m a perfectionist and I hold myself to an impossible standard. And so, I kind of one day looked in the mirror and I said, ‘That’s not what I want to look like.’ And I started off by eating healthier and working out in a healthy way, but then I wasn’t seeing anything, any results. And so that kind of spiraled and snowballed into where I am now. It got worse and worse and worse every year, because at that point I wasn’t able to see myself. I couldn’t see the true reflection or what I actually looked like.

“And then it took that ‘snap’ for people to truly see just how severe it really was. Because even with the weight loss, you can hide that stuff. You can avoid it. There are all sorts of things that you can do to trick people into thinking you’re OK if you don’t want them to know you’re hurting. And I was always doing that, because I don’t like when people worry about me; I want them to be happy. You know, I’m a people-pleaser. And 2020 was definitely the point where I was like, ‘I literally cannot function. I’m dizzy when I stand for no reason. And I feel sick. I have to put myself first now.'”

Watch Jackie Evancho’s full, extended Yahoo Entertainment interview below, in which she also discusses getting into show business at such a young age, her love for Joni Mitchell, her other bucket-list aspirations, her regrets about singing at Donald Trump’s inauguration, fighting for LGBTQ+ rights, and what other ’70s folk artist might inspire her next covers project:

Another wakeup call came soon after, in January 2021. After breaking her back in two places in a car accident, Evancho was diagnosed with osteoporosis, caused by her anorexia; doctors said her fractures were the type usually seen in 80-year-old patients. “That was wild,” says Evancho. “I’m still terrified to drive when the weather is slightly bad. I’m still in pain, because my back doesn’t bend like it used to. But the only pro that I got from that is now I know what I’m dealing with and I know that I have to be more cautious. I have to take vitamin supplements and fight even harder to be the eating disorders that are causing it.”

Evancho isn’t sure what her long-term osteoporosis diagnosis is “(I haven’t had a checkup yet, which I know I need that. …I’ve always had an aversion to doctors”), but when it comes to her eating disorder, she’s optimistic. She admits that it’s still “very hard to battle myself in my head when you have this disorder, thoughts fighting with, you know, my passion for life. And that’s the thing that sucks about this eating disorder. It totally makes you fight yourself. You end up exhausted, constantly fed-up. You feel left out because of your own choices. You can’t sit and enjoy the birthday cake with the family. You can’t go out to this event because you’re so exhausted from what you put yourself through that day. And it takes away so much of your life.” But she is ready for a change.

“I’m still fighting and I’m stuck in a spot where the real change has to happen,” Evancho states. “So, I’m still very much in the throes of it, but little by little, each therapy session and talk-through, I’m waking up a bit more. … I’m still very much going through the same exact things that I was back in 2020, it’s just that I’ve gotten more used to how those things feel — the type of nerves or panic. I know how to handle these things now, but I’m still very much in the process of healing all these things. I have to learn how to access what I’ve repressed. I have to learn how to process that in a healthy way, because I mean, that’s how eating disorders develop and all those unhealthy coping skills. I have to retrain myself how to function in a healthy way.”

Evancho has “gotten a lot of support” from fans since coming forward about her battle, and she says that’s “refreshing,” because earlier social media comments were not quite as kind. “I was getting before: ‘You’re dying right before our eyes.’ ‘What’s with young people not eating?’ “Have you ever heard of Karen Carpenter?” Evancho recalls. “And it’s just like, I know what I’m dealing with, and I can’t see myself the way everybody else could see themselves, or the way that they see me. For them to be harsh, it was hard for me to read. It made me panic. It made me feel bad about myself. So, seeing people kind of respond in a positive way to me finally being honest… it just reinforced my belief that if we’re honest with ourselves and we present in an honest way, even if it’s just how you feel that day, there’s no guilty. There’s no shame in that because you were honest. That’s my policy.”

Fortunately, Evancho’s health issues have not affected her beautiful vocals, although she says that it is “still very much a risk, and it’s an ongoing worry.” But she’s “definitely feeling up for” performing Carousel of Time – an album she is rightfully very proud of, and one that she hopes Mitchell will someday have the chance to hear — live in concert. And she says preparing for touring will help in her recovery. “I think it’s good for me, because even though I’m not healthy — I’m not 100% healthy yet — it puts me in a position where I have no choice. Because the voice that is pro-me, and not trying to beat me down, is fighting back a lot harder.”

Another fight that’s important to Evancho is the crusade for LGBTQ+ rights — a cause especially near and dear to her heart because her younger sister, Juliet, is trans. “[Juliet is] doing good, fighting hard to stand up for everybody’s rights, and, I couldn’t be more proud of her,” Evancho says proudly. “I am a 100% supported or supporter of all of that. My belief is that people should be who they want to be, love who they want to love, and what’s it to anybody else.” If they’re happy, why does that hurt you? If it’s not causing you to harm, leave it alone, let people be them.”

That brings us to 2017, when Evancho, still a naïve teenager at the time, sang the national anthem at Donald Trump’s presidential inauguration. She caught major flak for that performance, especially after in light of Trump’s record of action against transgender people, and she has since expressed regret for agreeing to do it. “From the beginning of my career to now, it’s been a journey of learning how to say ‘no.’ Um, I still suck at it, I swear,” she quips.

“When all of the inauguration stuff came to be, it was a full-on discussion,” Evancho explains. “And all I was hearing was ‘I get to sing the national anthem for a president, and for my country, and this is going to be something I’ve had on my bucket list that I can finally cross off.’ And no one truly knew what kind of president Trump would become, what he would truly follow through with. But I even made sure that my sister was OK with it too, because I didn’t ever want her to feel that I don’t support her, if I’m doing something that’ll put her in an uncomfortable position. And she was fully supportive of me, as much as I would be of her for anything. And that’s kind of why I proceeded, you know? And it sucks that afterwards seeing the result of it and what people were saying, what they thought of me as a result of somebody else’s actions. I think they’re separate things, and me singing for my country should have no reflection on my support of the LGBTQ community or my family.”

So, Evancho is moving on… and already looking ahead to her next collection of original music, which she promises will be more “vulnerable” than anything she has ever recorded before. “I would love to release an album of all of my original material and compose it, produce it all by myself,” she says, when asked what other career goals are on her above-mentioned bucket list. “That [traumatic] stuff only comes out when I’m songwriting. I basically just sit and write songs as much as possible. … And I do a lot of journaling.

“I like to say that it’s almost like reopening a wound, but instead of healing it, I’m painting with the blood.”