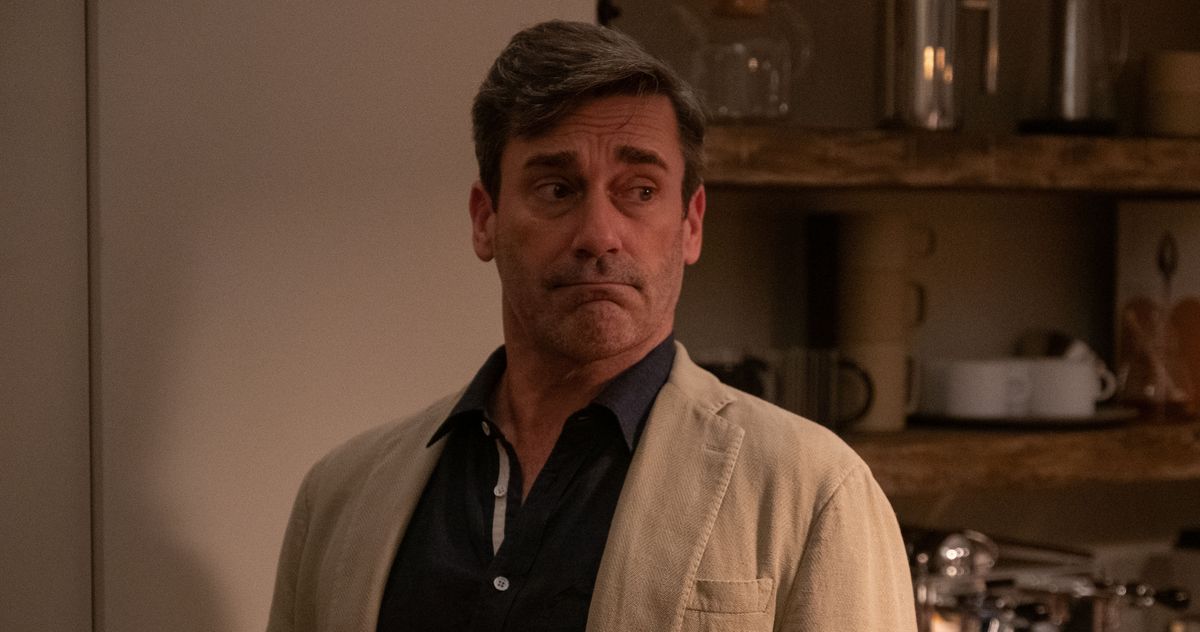 Roxana Hadadi is a TV critic who also writes about film and pop culture, with the closed captions on and motion smoothing off.

Jon Hamm’s performance in Confess, Fletch is like a knowing wink at everyone who loved him as Don Draper, misses him as Don Draper, and wonders why his career post–Mad Men hasn’t been as layered as the work he did as Don Draper. It’s one of few roles he’s had since the series’ 2015 end that fully grasps the layers of his appeal.

After recent serviceable-but-forgettable cop-adjacent turns (Top Gun: Maverick, Richard Jewell, The Report), Hamm slips into wryness and self-deprecation in this adaptation of Gregory Mcdonald’s novel about a former investigative reporter (“of some repute,” he says more than once) who meanders his way into detective work. The goofy physical comedy he too briefly displayed on 30 Rock, Unbreakable Kimmy Schmidtand that moment he awkwardly hoisted himself onstage to accept his Lead Actor in a Drama Series Emmy shines here. He pulls exaggerated faces, bounces between giggling and dryly bemused line deliveries, and attempts subterfuge by bopping his way at half-speed through a dancing crowd. But as Fletch, Hamm also invokes the full range he revealed throughout Mad Men and acknowledges his Don Draper persona while pushing against it, too.

In director Greg Mottola’s adaptation (in theaters and available for digital rental), Fletch is a bit of a womanizer, a bit self-destructive, a bit of an asshole, and a bit of an amused outsider — qualities that Hamm’s Draper shared. Through seven seasons of the AMC series, Hamm perfected the adman as an empathetic but inarguable villain, someone whose narcissism, melancholy, and impetuousness often meant that he ended up hurting those he cared for most. Comparatively, Hamm plays Fletch like a fun-house-mirror version of Don: The two are recognizably similar in broad strokes thanks to Fletch’s lusty, fumbling, self-satisfied qualities. But the actor’s willingness to directly send up Draper’s air of dapper authoritativeness makes Fletch goofier and, well, hammer and is key to the easy likability of this breezy film.

Confess, Fletch stars Hamm as the accused and follows two previous big-screen Mcdonald adaptations starring Chevy Chase, 1985’s Fletch and 1989’s Fletch Lives. In present-day Boston, Fletch returns home from two years working in Europe to discover a dead woman in the home his new girlfriend his, an Italian heiress, rented for him. Fletch claims not to know who she is, but local police detective Monroe (Roy Wood Jr.) and his trainee Griz (Ayden Mayeri) see the case as open and shut and start tailing Fletch. While Fletch evades them, he also pursues two investigations of his own his, making Hamm practically omnipresent; nothing happens in this screwy comedy without Fletch around to raise a mischievous eyebrow at it.

That affords enough screen time for Hamm to swing from comedy to sensuality to drama and back again. When Fletch says, “My Italian is very good,” after he uses the word for piss when he meant to say poolthere’s an echo of Draper’s misplaced certainty while delivering that boxing-themed Samsonite pitch. When he interviews a wannabe influencer (“Don’t you just hate people who are too poor to afford beauty? The worst”), he unites a prolonged eye roll and a whole-body chortle. When calling his girlfriend from jail, he slips into an undertone: “What aren’t you wearing?” And when Monroe wonders aloud who people hate more, cops or reporters, Hamm sneaks a resentful lilt into Fletch’s answer: “It’s cops.” In the hands of a showier, more mugging actor — say, a Ryan Reynolds — these moments might have an irritatingly self-satisfied quality. But Hamm plays them with such a downbeat, shrugging energy that he makes space for his fellow cast members in a give-and-take relationship that makes the film feel like a true ensemble effort.

Fletch’s combative relationship with Monroe and Griz allows shades of Don’s demanding, condescending dynamic with Sterling Cooper Draper Pryce underlings. “Shut up and talk,” an exasperated Monroe commands, to which Fletch responds, “That’s a very confusing combination of commands.” He sparks well against Marcia Gay Harden’s unimpressed Contessa, who negs her potential son-in-law her by pronouncing his name “Flesh” and comments casually on his her “big cock her.” (That latter line feels specifically engineered to poke at Hamm for telling Rolling Stone in 2013 that he wished people would “lay off” talking about the presumed size of his genitalia.) And in scenes with John Slattery, playing a former editor of Fletch’s who, of course, can’t stand his new millennial co-workers (“They ‘re so respectful. I can’t tell you how much I fucking hate this place”), the pair slide right back into the same chummy camaraderie that they honed as Roger and Don. The two eventually go to a bar to complain about life. What’s more fitting for them than that?

Mad Men gave Hamm many opportunities to reinvent himself, and Confess, Fletch achieves a similar feat with a role that highlights Hamm’s best qualities: the prickly tension he can summon in an instant, the droll humor he uses to offset his classic handsomeness, the graceful way he can move between canniness and charm. In the past, Hamm’s roles have demanded a couple of these traits at a time — the hotheaded asshole in Bridesmaidsthe nefarious FBI agent in Bad Times at the El Royalethe delightfully devious baddie in Baby Driver — but rarely have they converge while allowing Hamm to play a hero. If Confess, Fletch had any marketing effort behind it, this character could suggest a path forward for Hamm as a way to showcase his multifaceted dynamism.

Imagine Hamm’s Fletch at the center of a franchise fashioned like a British TV series: two to four episodes a season where Hamm could do his whole Columbo-meets-Clouseau thing with a rotating array of Mad Men cast members as guest stars. Will no streaming service give us this? What else is AMC+ doing? In the film’s final act, after Fletch has helped catch the murderer at a country club (and before an open ending that could easily lead into Fletch’s Fortune), Monroe observes, “Only you could have snuck in a place like this and been able to just blend in.” He could just as well be talking to Hamm, who saunters into this film and harnesses his past his as Don Draper to make a case for Fletch’s future. It’s too bad that our chances of ever seeing it are disappearing as swiftly as Don’s footprints in Hawaiian sand.

Sign up to get New York‘s week in reviews.