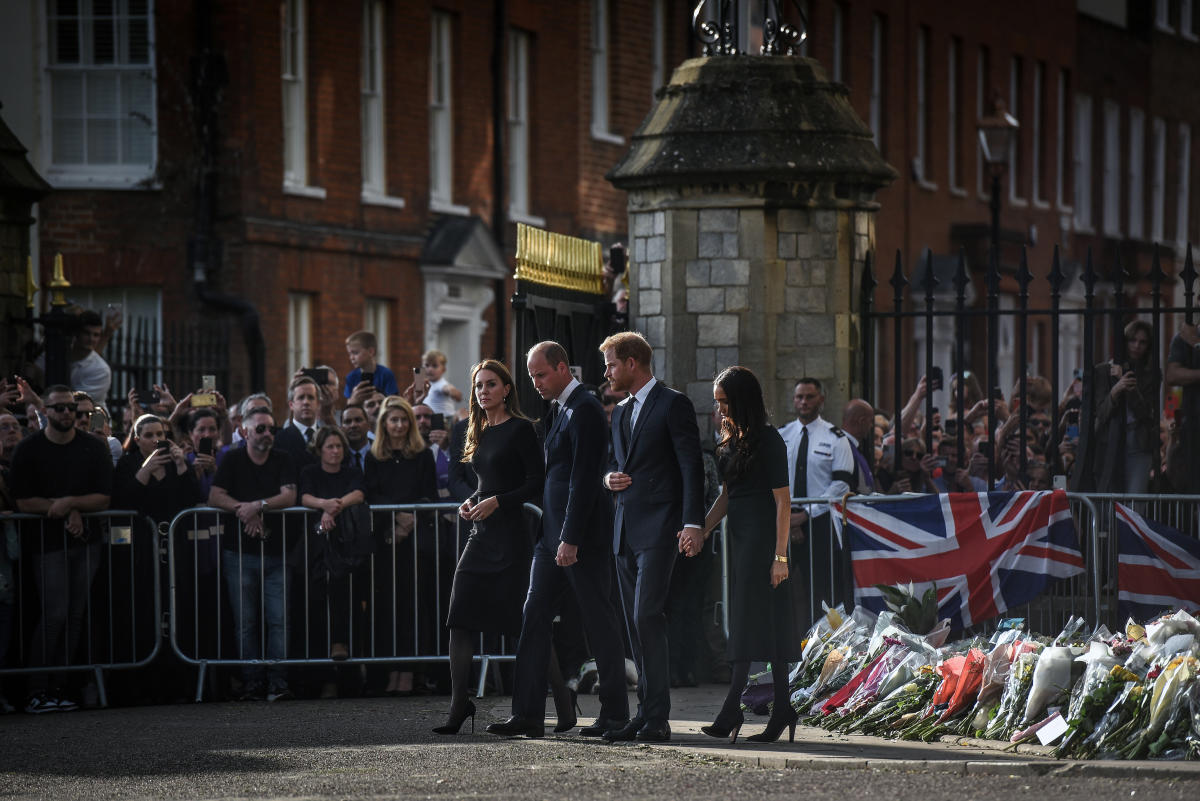 LONDON — All Meghan, the Duchess of Sussex, did was put on a somber outfit and a sympathetic expression and walk around in public with three other people for 45 minutes. But the pointillistic armchair analysis of that brief event — a surprise outing outside Windsor Castle last Saturday featuring Meghan and her husband, Prince Harry, and Prince William and his wife — has gone on ever since.

The incident, for those following this particular saga, represented a brief cessation of, or maybe presaged an eventual thaw in, the coldness and hostility that has developed between the Prince and Princess of Wales (William and Kate) and the Duke and Duchess of Sussex (Harry and Meghan) in the past few years.

Thrown, or perhaps pushed, into shared mourning after the death of Harry and William’s grandmother, Queen Elizabeth II, the four came together for the first time in more than a year to express their gratitude to the crowds, admire the bouquets of flowers left for the queen and demonstrate that they were able to exist in the same general location without seeming overtly hostile to one another.

Sign up for The Morning newsletter from the New York Times

From the moment Meghan appeared in public and in the days that followed, Meghan-watchers in the papers and on social media have analyzed the video of the event as if it had been filmed by Zapruder himself, turning into instant lip-readers, body language analysts, fashion critics and protocol experts in service to a never-ending parlor game: What Has Meghan Done Now?

How did Meghan’s dress (black and calf-length, with a flared skirt) compare with Kate’s dress (black and calf-length, with a slim skirt)? Did Kate snub Meghan by apparently not looking at, talking to or acknowledging her? Was it true, as someone claimed on TikTok, that Meghan tried to forge ahead of the others into the flower area, only to have Harry remind her “of royal protocol by subtly holding her hand back to let William and Kate come through to the flowers first?”

Opinions about Meghan vary widely, and with facts thin on the ground, responses to events like these tend to reflect deeply held and entrenched emotions. So some people reported on social media that a happy murmur went through the crowd at Windsor when they saw the two couples together; others said the opposite, declaring that while some mourners were excited to see William, Kate and Harry, they were actively opposed to Meghan’s presence. Various topics trended on Twitter: #Meghan (mixed views but with a healthy pro-Meghan contingent) and #MeghanMarkleGoHome (self-explanatory).

A similarly robust and mostly fact-free conversation erupted Wednesday after the two couples, along with other members of the royal family, left a service at Westminster Hall following the arrival of the queen’s coffin. Harry and Meghan walked out holding hands, unlike most of the other royal couples. A debate ensued: Were they disrespectfully behaving like “lovesick teenagers,” or was it OK to hold hands with your spouse while leaving a somber occasion?

It turned out, too, that another pair — Princess Anne’s daughter, Zara, and her husband, Mike Tindall — also held hands on the way out, which added an element of confusion to the issue. As Meghan fans have long pointed out, she is often attacked by the hostile tabloids and on social media for doing the exact same things that other royals, particularly Kate, are praised for.

In the United States, where they moved after stepping back from royal duties in 2020 (“Megxit”), Meghan and Harry have been working diligently to raise their two children and reposition themselves as celebrities and influencers — that is, American-style royals — with a splashy Netflix deal and multiple charity and business ventures. They have made high-profile speeches at places like the United Nations (Harry), started a podcast series featuring interviews with famous guests (Meghan), brought the cameras along to record them as they do charity work, and spoke publicly about issues like mental health and how they feel betrayed and mistreated by Harry’s family.

They are collaborating on a memoir that they say will be a candid account of who they are and how they feel, with plenty of details about their falling out with the royal family and their uneasy departure from Britain.

When Elizabeth died last week, the couple were already in Britain at the tail end of what The Daily Mail derided as a “pseudo-royal tour” and The Times of London unkindly called “a mini freelance royal tour.”

Accusing Meghan and Harry of blatant attention-seeking during this trip, the papers nevertheless stepped on their own arguments by showering them with attention, albeit mostly negative. “For those of us who have had more than enough of Harry and Meghan, I’m afraid they’re back on this side of the Atlantic,” Hilary Rose wrote in The Times of London.

Then the queen died, and Harry traveled by himself to Balmoral, in Scotland. Some reports said, without verifiable attribution, that he had been ordered to leave Meghan behind so as not to upset the rest of the family. Harry stayed for just a short time before returning to his wife. There things stood until they accepted the invitation to walk around for a bit with William, Kate, the crowds at Windsor and a bunch of cameras.

Alas, we’ll never know the truth behind it. We’ll never know, for instance, if the possible rapprochement came about because King Charles III “ordered his warring sons to set aside their ongoing feud,” as The Daily Mail reported Saturday — or because William unilaterally sent a “bombshell text” to his brother laying out the terms of the proposed joint appearance, as the paper (contradicting itself) reported Sunday.

The Mirror tabloid followed what appeared to be an anti-Meghan party line in reporting that some of the mourners in the crowd refused to shake her hand and, in one case, haughtily donned a pair of sunglasses in response to her arrival. According to the paper’s analysis of a video of the incident, another woman turned away and then pointedly “gave the Duchess of Sussex the stink eye, before laughing” in her general direction.

Meanwhile, commentator and controversialist Piers Morgan, an obsessively close observer and relentless critic of Meghan, inevitably waded in with his usual splenetic views.

“Don’t be misled by the scenes of supposed hatchet-burying between William and his brother at the weekend,” he wrote in The New York Post and on the Fox News website in a piece titled, “Harry, If You Really Want to Honor Your Dad, Nix Your Salacious Tell-all and Rein In Your Royals-Trashing Wife.”

To which one reader responded on Twitter: “’Rein in your wife’…?! What is this, the Middle Ages?!!!”