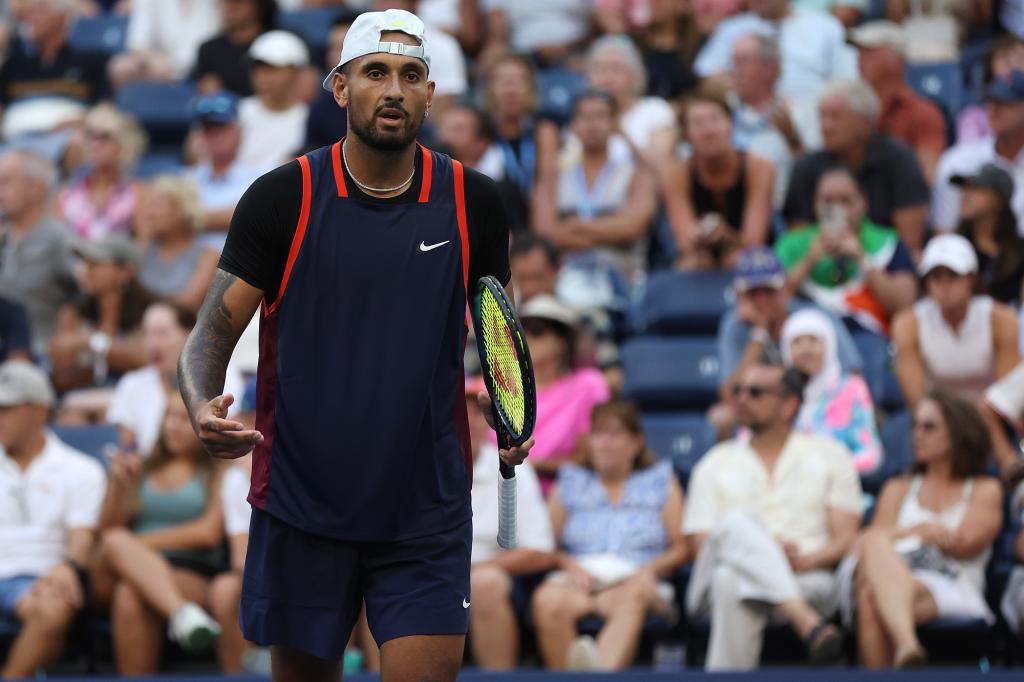 First, there was the woman at the Wimbledon final who in Nick Kyrgios’ estimation looked like she’d had “700 drinks, bro.” This time, it was the smell of weed that set off the combustible Aussie.

Kyrgios was deep into the second set of his second-round match against Benjamin Bonzi on Wednesday evening at the US Open when he turned to the chair umpire and started complaining about the whiff of marijuana being in the air at Louis Armstrong Stadium.

Up a set and at 4-3 on serve in the second, Kyrgios asked the umpire to issue a warning to the crowd after claiming he had seen and smelled someone smoking marijuana. On the way to his bench during a changeover, the 27-year-old sniped, “You don’t even want to remind anyone not to do it?”

The umpire seemed to think Kyrgios was complaining about the smell of food, though, which didn’t go over well with the always-on-edge star.

“It was f–king marijuana,” Kyrgios shot back. “Obviously I’m not going to be complaining about food stuff. Obviously not.

“Obviously when athletes are running side-to-side and they have asthma already it’s probably not ideal.”

The umpire addressed the crowd as the two players returned to their respective baselines, saying, “Ladies and gentlemen, a reminder that you cannot smoke on court.”

Then Kyrgios went on to close out the second set on the Frenchman, 6-4.

It was hardly the last of his blow-ups, though. Kyrgios was issued a code of conduct warning for spitting on the court after being broken late in the third set, which he went on to lose, 6-4.

“People don’t know. I’m a heavy asthmatic,” Kyrgios said afterwards. “When I’m running side to side, I’m struggling to breathe, probably not something I want to be breathing in between points.

“Yeah, US Open, it’s a very different vibe to everywhere else. I feel like Wimbledon was so proper. Australian Open, you kind of expect it there, being an Aussie. But here, it’s just like noisy. Point in, point out, I can’t barely hear. Half the time I can’t even hear my team because it’s so noisy all the time. … Constant jitter. Things going off, sirens. … For someone that’s struggled to focus in my career, I’m really trying hard to put my head down and play point by point, try to dig myself out of some certain situations. It’s hard because there’s a lot of distractions. Obviously a lot of heckling going on as well. People are saying things. I got to be very careful with what I say these days.”

This also isn’t the first time Kyrgios has found himself amid a marijuana controversy at the US Open.

Six years ago, he caused a stir during the tournament when he responded to a Twitter follower and said that players on tour are allowed to smoke marijuana. A WADA spokesperson later confirmed it as well, saying that while it is prohibited during competition it is not banned outside of play.

This year, he’s facing more serious matters. In July, he was charged with allegedly assaulting his former girlfriend. The case is scheduled for October in Australia. He’s also being sued for defamation by Anna Palus, a Polish lawyer and the woman he accused of being drunk at Wimbledon.

On the court, meanwhile, Kyrgios has played arguably the best tennis of his career this year.

He reached his first Grand Slam final earlier this summer at Wimbledon, where he won the first set against Novak Djokovic only to lose the next three. But in his next tournament a few weeks later, he won the singles and doubles titles on the same day at the Citi Open in Washington DC, where he won the entire tournament without being broken.

Wednesday, Kyrgios also easily finished off Bonzi, 7-6 (3), 6-4, 4-6, 6-4, racking up 30 aces along the way, to advance to the third round of the US Open for the fifth time in his career. Next up for Kyrgios is JJ Wolf on Friday as he tries to advance to the fourth round in Flushing for the first time.

“The Wimbledon final was a turning point I think for me mentally,” Kyrgios said. “If I won that match, I don’t know where my motivation would have been at. Losing it and being so close, it was really tough for me to kind of swallow that.

“For me, personally, I didn’t think I’d be putting this amount of pressure on myself. … I almost don’t know who I am anymore, to be honest, because that’s not me. Trying to balance so many different things out. … It’s just a lot. Yeah, it’s stressful.”

The good news for Kyrgios? Marijuana is legal in New York, so there’s little chance anyone will sue him for defamation.