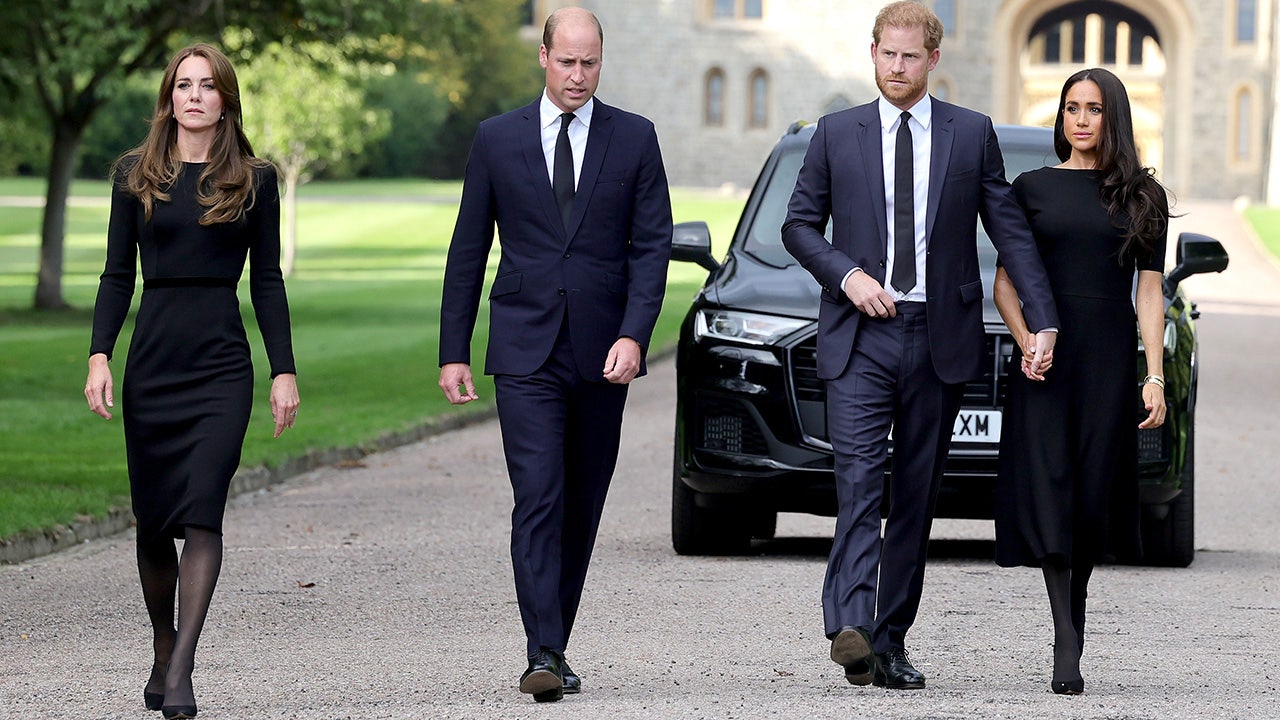 Prince William and Kate Middleton had a noticeably different approach to handling the general public than Prince Harry and wife Meghan Markle as they greeted hundreds of people outside of Windsor Castle who were mourning the loss of Queen Elizabeth II who died on Thursday at the age of 96.

Body language expert Tonya Reiman exclusively told Fox News Digital there was a “gigantic difference” between the couples, which began in the way “they approached one another” and carried on throughout the long walk as Harry lovingly held his wife’s hand while the newly- appointed Prince and Princess of Wales acted more like “royals” with distance between the pair.

“People were going, ‘Oh My God, you see how much love there is between one couple [Harry and Meghan]but the other couple [William and Kate] even royals.’ They’re used to this stuff,” Reiman said.

The new “Fab Four” reunited after years apart, but weren’t without some criticism as Prince William went viral in a video where he was criticized for his lack of chivalry for his wife, while Harry rushed to be by Meghan’s side and opened a car door as the group left the event together Saturday.

Reiman noted that while Harry is obviously protective of Meghan, his penchant for crossing his arm over his jacket was due to never truly feeling comfortable in the spotlight despite nearly four decades with royal status.

Kate Middleton and Prince William were far less affectionate with each other while greeting the crowds outside Windsor Castle on Sunday, according to a body language expert.
(Chris Jackson)

“He always does this, that’s a comfort level thing to cross his arms and when we cross our arms across our body, it’s to help us feel less vulnerable. When I see this, I don’t see discomfort on Harry’s part, but I feel vulnerability,” Reiman said.

“When you look at Kate, she is all royal. She is the one. So looking at Kate, you have to recognize this is kind of what she’s been primed for. I don’t think that there’s a question of who’s better at it . I think it’s more who was more comfortable being in that skin, and that for me is Kate.”

Reiman also noted that Middleton’s facial expressions were more demure and royally charged with an “I don’t care about you” instinct, as she insisted, “It’s how she’s been bred. A hug from Kate is kind of like there’s an invisible wall up .”

On the other side of the coin, “A hug from Meghan is like, ‘Oh my God, We’re best friends.’ The difference in something as simplistic as how close you get to a hug demonstrates the difference in culture and how we feel about people and how we react.”

“When it comes to the hand holding, there is a difference between the two brothers. I think it suggests more of what William and Kate feel is ‘appropriate’ and what Meghan and Harry feel comfortable with.”

Reiman commented that the differences were more evident than ever when Harry ran to open the car door for Meghan while William stood aside as Kate handled the situation alone. “You become comfortable with what you know and expect,” she said.

As they made their way to the crowds, the “difference is definitely obvious when you come to Meghan” who was warm and welcoming, offering hugs and speaking with members of the public as if they were her own family. At one point, it appeared as though Meghan promised to bring flowers to The Queen’s resting place, but an aide insisted Markle hand over the flowers and continue meeting with the people.

“Whereas Kate might feel on some level that same way, but she doesn’t demonstrate that same amount of emotion. She’s more ‘this is what’s proper’, ‘this is what I’ve been bred to do’. The two brothers are similar like that,” Reiman said. “When you look at Harry, he is much more open yet very uncomfortable. He’s always doing something that demonstrates discomfort, whether it’s closing his arms off or whether it’s putting your hand up and never in a rude manner, but a manner that says I need some kind of barrier.”

“William is just completely royal and has a ‘don’t get too close to me’ persona. So I think Harry wants to be the person who gets close, but can’t because of how he’s been brought up. He tries, but you can always see that there’s something stopping him and again, I don’t think that’s a conscious thing. I think he tries but he can’t. When you look at William, I think that it’s more of a ‘this is the line that we draw in the sand, and you can’t cross it.'”

Despite perceived tension, William and Kate “know their roles” and what’s expected of them as senior royal family members.

“They know what they’re supposed to demonstrate. So they do that,” Reiman insisted. When asked about the incident where the Prince of Wales forgot to help Kate into the waiting vehicle, Reiman said, “William is not going to open the door because he knows there’s somebody to open the door for her. For Meghan and Harry, it’s more of an affectionate moment. This is a different kind of relationship. And this is also the relationship that you put out to the public.”

“Harry is just much more emotional and that’s the way he’s grown up. I think that when you look at the two boys, the reaction is different. So Charles can say, my kids have both the same breeding, but that’s not the same as having the same personality. When they talk about what’s proper, they would probably say that William is more proper. It’s just what they’ve been exposed to.”