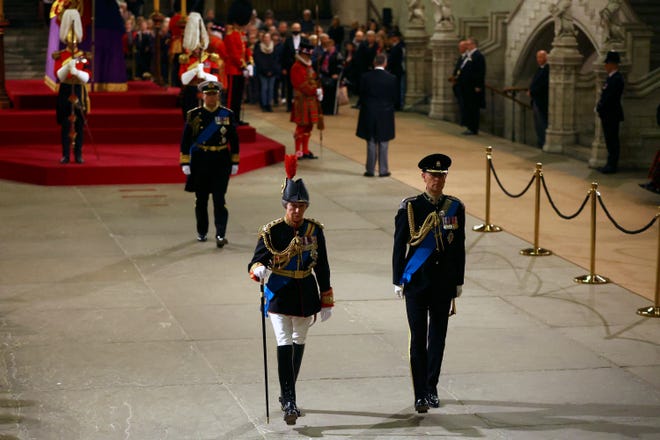 Princess Annethe late Queen Elizabeth’s no-drama daughter long known as the royal workhorse, has been front and center after her mother’s death, prompting many to wonder: Why don’t we see more of her?

First reason: The media have not been as interested in her as they are in gossip about whatever the younger royals are up to. And second, Anne, 72, likes it that way. The Princess Royal, as she is known, doesn’t do gossip – or self-promotion.

Instead, she does her job with a minimum of fuss, showing up month after month, year after year, cutting ribbons, visiting charities, opening hospitals, attending meetings, unveiling plaques. Anne is one of those royals who takes her great-grandmother Queen Mary’s famous dictum seriously.

“We are never tired, and we love hospitals,” said the queen consort to George V about the royal show. Like great-granny, Anne has long been more respected than adored.

When Queen Elizabeth II died at her Highlands castle in Scotland, age 96, Anne, who was very close to her mother, was there with her brother Charles. A woman who rarely displays her emotions, pictures showed Anne’s heartbreak on her face. But she carried on, escorting the queen’s coffin home through days of ceremonies in Scotland and in London leading up to the funeral Monday at Windsor Castle.

Pictures and video of Anne – a former Olympic athlete previously known for her poker face and steely mien – evoked sympathy and admiration for her fortitude. And she made history as the first royal woman to march in the funeral processions and stand vigil by the queen’s coffin with her brothers.

Now there is an expectation that she will be more prominent in the reign of her brother, King Charles III. She might even be returned to the status of “Counselor of State,” one of five top royals delegated to step in if the king is incapacitated or abroad.

Take a closer look at Anne:

Who is Princess Anne?

She’s the second child and only daughter of the late queen and her husband, the late Prince Philip the Duke of Edinburgh, and the only sister of the new King Charles III. She was born Aug. 15, 1950, at Clarence House, when her mother was still Princess Elizabeth, only 24 at the time.

Family, media pictures and films of young Anne show her as a sturdy and confident child with white blond hair, playing with her brother, the more reserved and less confident Charles. Their childhood with their young parents, before the crown was thrust upon them, was happy and close.

Why is Princess Anne known as the royal workhorse?

In 2021, she was named the year’s hardest working royal with 387 engagements, followed closely by her brother, then the Prince of Wales. (Yes, there are people inside and outside the palaces who keep track of this sort of thing.)

She has approached her royal role briskly, like her father the late Prince Philip. She shows up for her engagements well prepared, is curious and direct about whatever she’s doing, takes notes, shakes hands, and usually charms everyone. She is widely considered smart and tart.

She’s also astonishingly self-possessed. In 1974, she was the victim of an attempted kidnapping, when the car she was in was stopped by an armed man who shot her driver, bodyguard, a police officer and a nearby journalist who rushed to help. When the kidnapper ordered her to get out of the car, she snapped, “Not bloody likely.” She was eventually rescued; everyone survived their gunshot wounds. The kidnapper, diagnosed with schizophrenia, pleaded guilty to attempted murder and kidnapping remains in a mental hospital.

Why is Anne called the Princess Royal?

The honorary style is traditionally (but not automatically) bestowed by a monarch on the eldest daughter, and is the highest honor given to a female member of the royal family. She received the title from the late queen in June 1987, when Anna was 36 and had long established her royal work ethic.

There have been seven Royal Princesses in history; the last one was Anne’s great-aunt, Princess Mary, the only daughter of King George V; she died in 1965.

Where is Princess Anne in the line of succession?

Anne is 16th in line to the throne – even though she is the second of the late queen’s four children. That’s because she was born before a new law was passed in 2013changing the rules for the succession so that it is based on birth order, not gender, known as male primogeniture.

Under the previous rules, dating to 1701, brothers superseded sisters in the succession even if sisters were first born.

The result is that Anne and her two children and her five grandchildren are far back in line, and have largely escaped the withering spotlight trained on the top heirs in the succession, Princes William and Harry and their five children.

Why isn’t Anne a ‘counsellor of state’ like she used to be?

If the sovereign cannot carry out official duties due to illness or absence abroad, two or more of the five Counselors of State are appointed to act in the sovereign’s place. By law, the five counselors must include the sovereign’s spouse and the next four people in the succession over the age of 21.

Now there are calls for Parliament to change the law to include Anne. (She was a counselor of state in the past while her brothers and Charles’ children were young.)

There is precedent for this, he says Craig Prescott, an expert on law, Parliament and the monarchy at Bangor University in Wales, but it’s not guaranteed. It would make sense, he says, to add Anne and brother Prince Edward, 58, to the list of counselors, but there are other options, including rethinking the role entirely.

“I think (the king) might consider changing it as he reconsiders what the monarchy looks like – maybe having senior royals who can complete duties in a way that’s not dictated by the line of succession that it once was,” Prescott said in an email to USA TODAY. “He might say that if you’re going to be a senior working royal, then being a counselor of state is part of the package.”

Yes, to her second husband, Vice Admiral Sir Timothy Laurence, who has been by her side during the public funeral ceremonies, including marching behind the queen’s coffin in processions with the queen’s male grandchildren, nephew and cousin.

Anne was the first of the queen’s children to marry, to Capt. Mark Phillips in 1973; they were divorced 19 years later. She married Laurence, a former equerry (member of the household) to the queen, in 1992.

Before she married, Anne dated a number of prominent or aristocratic men, including Andrew Parker Bowles, the first husband of her sister-in-law, Queen Consort Camilla and father of Camilla’s two children.

How many children and grandchildren does Princess Anne have and why don’t they have titles?

Her son is Peter Phillips, 44, and her daughter is Zara Phillips Tindall, 41. Peter, who is divorced, has two daughters, Savannah, 11, and Isla,10. Zara, who is married to former English rugby star Mike Tindall, has three children, Mia, 8, Lena, 4, and Lucas, 1.

Anne’s children do not have titles, even though they are grandchildren of a monarch, because Anne and her first husband declined the offer from the queen to bestow them. (Peter Phillips was the first legitimate grandchild of a monarch in more than 500 years to be born without a title or courtesy title.)

“I think it was probably easier for them, and I think most people would argue that there are downsides to having titles,” Anne told Vanity Fair in 2020.

Besides being hardworking, what is Anne known for?

She is a champion equestrian. Like her mother, she is a lover of horses but the late queen focused on the racing side and Anne focused on competitive riding, or eventing, becoming a respected athlete (along with her mounts). She won a gold medal in 1971 and two silver medals in 1975 at the European Eventing Championships.

In 1976, Anne became the first member of the royal family to compete in the Olympic Games: In Montreal she was a member of the British team, riding the queen’s horse, Goodwill, in eventing. Halfway through the course, she suffered a concussion but, true to her grit, she remounted and finished, although later she said she can’t remember making the rest of the jumps.

She is president of the British Olympic Association and is a member of the International Olympic Committee, who attends the games. She helped organize the campaign bring the 2012 Olympics to Londonthe summer of the late queen’s Diamond Jubilee, and Britain won a total of 65 medals.

Among the winners: Anne’s daughter Zara, who is an equestrian champion like her mother and her father (Mark Phillips was also an Olympic equestrian who met Anne on the circuit, and was a member of the gold medal-winning British team in 1972). At the 2012 Olympics in London, Zara won a silver medal as a member of the British eventing team.

Anne gave out the medals.