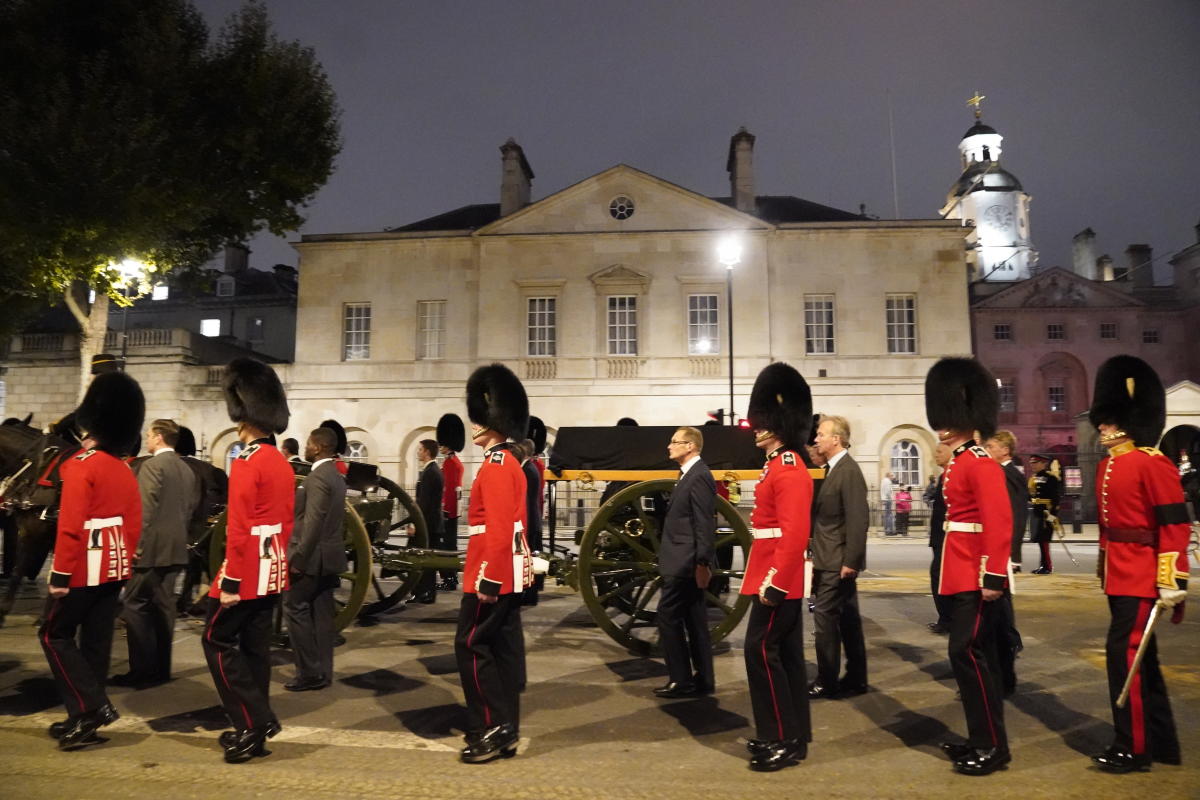 The Queen’s coffin will make its journey from Edinburgh to London today, where it will lie in state ahead of her funeral next week.

After spending a night on public view at St Giles’ Cathedral in Edinburgh, the casket will be taken to Edinburgh Airport at 5pm and then flown to RAF Northolt in west London on an RAF Globemaster C-17 flight, accompanied by the Princess Royal and her husband, Vice Admiral Sir Tim Laurence.

It is expected to land at 6.55pm and, from there, it will be taken to Buckingham Palace, accompanied by Anne and Vice-Admiral Sir Tim, where it will be met by King Charles and the Queen Consort, along with the Prince and Princess of Wales.

It will stay there overnight ahead of a period of ‘Lying-in-State’. During the Lying-in-State period, the Queen’s closed coffin rests on a raised platform called a catafalque and members of the public will file past to pay their respects.

Some people already started queuing for the Queen’s lying in state two days early, with the public warned to expect long queues.

Where will the Queen’s Lying-in-State be?

On Wednesday, a ceremonial procession will transport the coffin from Buckingham Palace to Westminster Hall, beginning at 2:22 pm.

It will proceed along The Mall, Horse Guards Road, across Horse Guards Parade and onto Whitehall to Parliament Square and into the Palace of Westminster.

The Queen will then Lie-in-State at the Palace of Westminster from Wednesday (September 14) until her funeral on Monday, September 19.

Who was the last person to lie in state?

The Queen Mother lay in state for three days in Westminster Hall, with around 200,000 estimated to have attended to pay their respects.

Her funeral was held in Westminster Abbey on April 9, 2002.

Can I watch the Lying-in-State procession?

The Lying-in-State procession will be broadcast on national television and radio, but you can also watch it in person at special viewing areas along the route and also on large screens in Hyde Park.

Viewing areas along the route of the procession will open at 11am on Wednesday (September 14). Large crowds are expected and people are advised that there will be queues.

The government has published a list of the viewing areas along with instructions and directions of how to access them.

A special screening site is also being set up in Hyde Park where the procession will be shown on large screens.

The Hyde Park screening site will also open at 11am on Wednesday (14 September).

What are the rules for visiting Westminster Hall?

The Lying-in-State at the Palace of Westminster opens to the public at 5pm on Wednesday (14 September) and will be open 24 hours a day until it closes at 6.30am on the day of her funeral.

Members of the public can attend the Lying-in-State where they will be able to file past her closed coffin as it sits on a raised platform and pay their respects.

There are various rules in place for people wanting to attend the Lying-in-State.

First visitors will have to go through airport-style security, with tight restrictions on what you can take with you.

Visitors can only take one small bag, smaller than 40cm x 30cm x 20cm, with one simple opening or zip, with them. so you can move quickly through the security check.

Certain items are banned from being taken in, including:

Government advice also urges visitors to “respect the dignity of this event and behave appropriately”.

Visitors will have to remain silent while inside, and mobile phones must be put on silent.

People are not allowed to queue on behalf of others, which will be patrolled by stewards and police officers.

The government advice adds: “Antisocial or inappropriate behavior (including queue-jumping, excessive consumption of alcohol or drunken behaviour) will not be tolerated and you will be removed from the queue.”

Watch: Where and when can you see the Queen lying in state?

How long could the queues be?

Queues are expected to be “very long”, with people planning to attend the Lying-in-State warned that they will need to stand “for many hours, possibly overnight”.

Some people had already started queuing days before the Lying-in-State was set to start, with many traveling miles for the historic occasion.

People have also been reminded that there will be little chance to sit down as the queue will be continuously moving, with parents urged to think carefully before taking children.