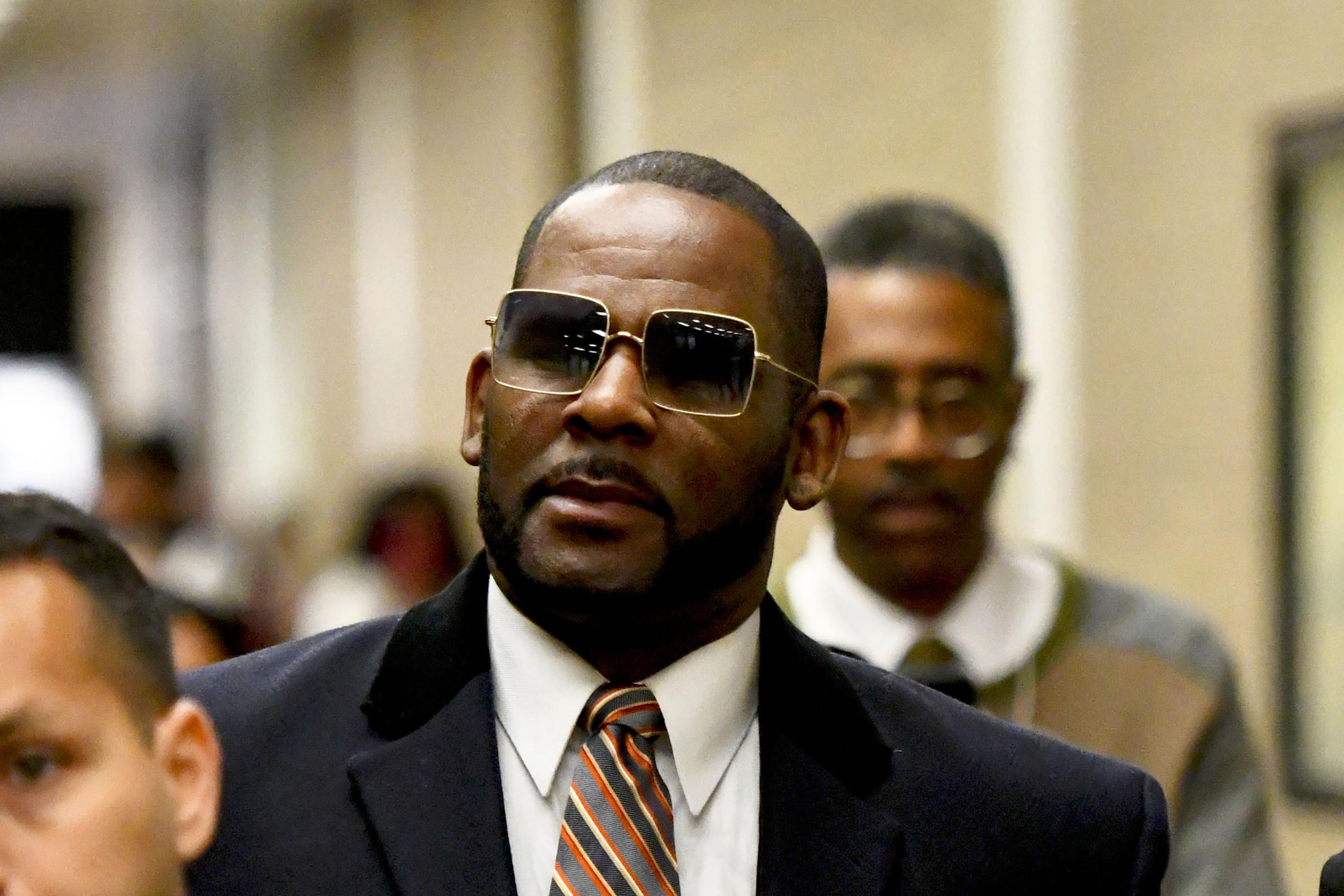 CHICAGO (AP) — A federal jury on Wednesday convicted R. Kelly of several child pornography and sex abuse charges in his hometown of Chicago, delivering another legal blow to a singer who used to be one of the biggest R&B stars in the world.

But the jury acquitted him on a fourth pornography count as well as a conspiracy to obstruct justice charge accusing him of fixing his state child pornography trial in 2008. He was found not guilty on all three counts of conspiring to receive child pornography and for two further enticement charges.

His two co-defendants were found not guilty on all charges.

Jurors, who deliberated for 11 hours over two days, wrote several questions to the judge on Wednesday, at least one indicating the panelists were grappling with some of the case’s legal complexities.

One asked if they had to find Kelly both enticed and coerced minors, or that he either enticed or coerced them. Over objections from Kelly’s lawyer, the judge said they only need to find one.

At trial, prosecutors sought to paint a picture of Kelly as a master manipulator who used his fame and wealth to reel in star-stuck fans, some of them minors, to sexually abuse then discard them.

Kelly, born Robert Sylvester Kelly, was desperate to recover child pornographic videos he made and lugged around in a gym bag, witnesses said. They said he offered up to $1 million to recover missing videos before his 2008 trial, knowing they would land him in legal peril. The conspiracy to hide his abuse ran from 2000 to 2020, prosecutors said.

Kelly associates Derrel McDavid and Milton Brown were co-defendants at the Chicago trial. Jurors acquitted McDavid, a longtime Kelly business manager, who was accused of conspiring with Kelly to rig the 2008 trial. Brown, a Kelly associate for years, was acquitted of receiving child pornography.

Kelly has already been convicted of racketeering and sex trafficking in New York and sentenced to 30 years in prison.

In Chicago, a conviction of just one count of child pornography carries a mandatory minimum sentence of 10 years, while receipt of child pornography carries a mandatory minimum of five years. Judges can order that defendants sentenced earlier in separate cases serve their new sentence simultaneously with or only after the first term is fully served. Federal inmates must serve at least 85% of their sentences.

During closing arguments Tuesday, Kelly attorney Jennifer Bonjean likened the government’s testimony and evidence to a cockroach and its case to a bowl of soup.

If a cockroach falls into soup, she said, “you don’t just pull out the cockroach and eat the rest of the soup. You throw out the whole soup,” said the jurors.

“There are just too many cockroaches,” she said of the prosecution’s case.

The three defendants called only a handful of witnesses over four days. Co-defendant McDavid, who was on the stand for three days, may have damaged Kelly’s hopes for acquittal by saying that he now doubts Kelly was truthful when he denied abusing anyone after hearing the superstar’s accusers testify.

In her closing rebuttal, prosecutor Jeannice Appenteng cited testimony that Kelly’s inner circle increasingly focused on doing what Kelly wanted as his fame boomed in the mid-1990s.

“And ladies and gentlemen, what R. Kelly wanted was to have sex with young girls,” she said.

Four Kelly accusers testified, all referred to by pseudonyms or their first names: Jane, Nia, Pauline and Tracy. Some cried when describing the abuse, but otherwise spoke calmly and with confidence. A fifth accuser, Brittany, did not testify.

Sitting nearby in a suit and face mask, Kelly often averted his eyes and looked down as his accusers spoke.

Some dozen die-hard Kelly fans regularly attended the trial. On at least one occasion during a break, several made hand signs of a heart at Kelly. He smiled back.

Jane, 37, was the government’s star witness and pivotal to the fixing charge, which accused Kelly of using threats and payoffs to get her to lie to a grand jury before his 2008 trial and to ensure she and her parents wouldn’t testify.

A single video, which state prosecutors said was Kelly abusing a girl of around 14, was the focal point of that trial.

On the witness stand for two days at the end of August, Jane paused, tugged at a necklace and dabbed her eyes with a tissue when she said publicly for the first time that the girl in the video was her aged 14 and that the man was Kelly, who would have been around 30.

Some jurors in the 2008 trial said they had to acquit Kelly because the girl in the video did not testify. At the federal trial in Chicago, Jane said she lied to a state grand jury in 2002 when she said it was not her in the video, saying part of her reason for lying was that she cared for Kelly and didn’t want to get him into trouble.

Jane told jurors she was 15 when they first had intercourse. Asked how many times they had sex before she turned 18, she answered quietly: “Uncountable times. … Hundreds.”

Jane, who belonged to a teenage singing group, first met Kelly in the late 1990s when she was in junior high school. She had visited Kelly’s Chicago recording studio with her aunt, a professional singer. Soon after that meeting, Jane told her parents Kelly was going to be her godfather.

Jane testified that when her parents confronted Kelly in the early 2000s, he dropped to his knees and begged them for forgiveness. She said she implored her parents not to take action against Kelly because she loved him.

Defense attorneys suggested a desire for money and fame drove some government witnesses to accuse Kelly, and they accused several people of trying to blackmail him. They also suggested that at least one of his accusers was 17 — the age of consent in Illinois — when Kelly began pursuing her for sex.

Bonjean implored jurors not to accept the prosecution’s portrayal of her client as “a monster,” saying Kelly was forced to rely on others because of intellectual challenges, and that he was sometimes led astray.

“Mr. Kelly can also be a victim,” she said in her opening statement.

Prosecutors played jurors excerpts from three videos that Jane said featured her. Court officials set up opaque screens around the jurors so journalists and spectators could not see the videos or the jurors’ reactions.

But the sound was audible. In one video, the girl is heard repeatedly calling the man “daddy.” At one point she asks: “Daddy, do you still love me?” The man gives her sexually explicit instructions.

Prosecutors have said Kelly shot the video that was also evidence in the 2008 trial in a log cabin-themed room at his North Side Chicago home around 1998.

Another accuser, Pauline, said Jane introduced her to Kelly when they were 14-year-old middle school classmates in 1998. At Kelly’s Chicago home later that year, Pauline described her shock when she said she first walked in on Kelly and a naked Jane . She said Kelly told her that everyone has secrets. “This is our secret,” she testified he said.

Pauline told jurors she still cares for Kelly. But, as a 37-year-old mom, she said she now has a different perspective.

“If somebody did something to my kids,” she said, “I’m killing ’em.” Period.”

Follow Michael Tarm on Twitter at https://twitter.com/mtarm and find AP’s full coverage of the R. Kelly trial at https://apnews.com/hub/r-kelly