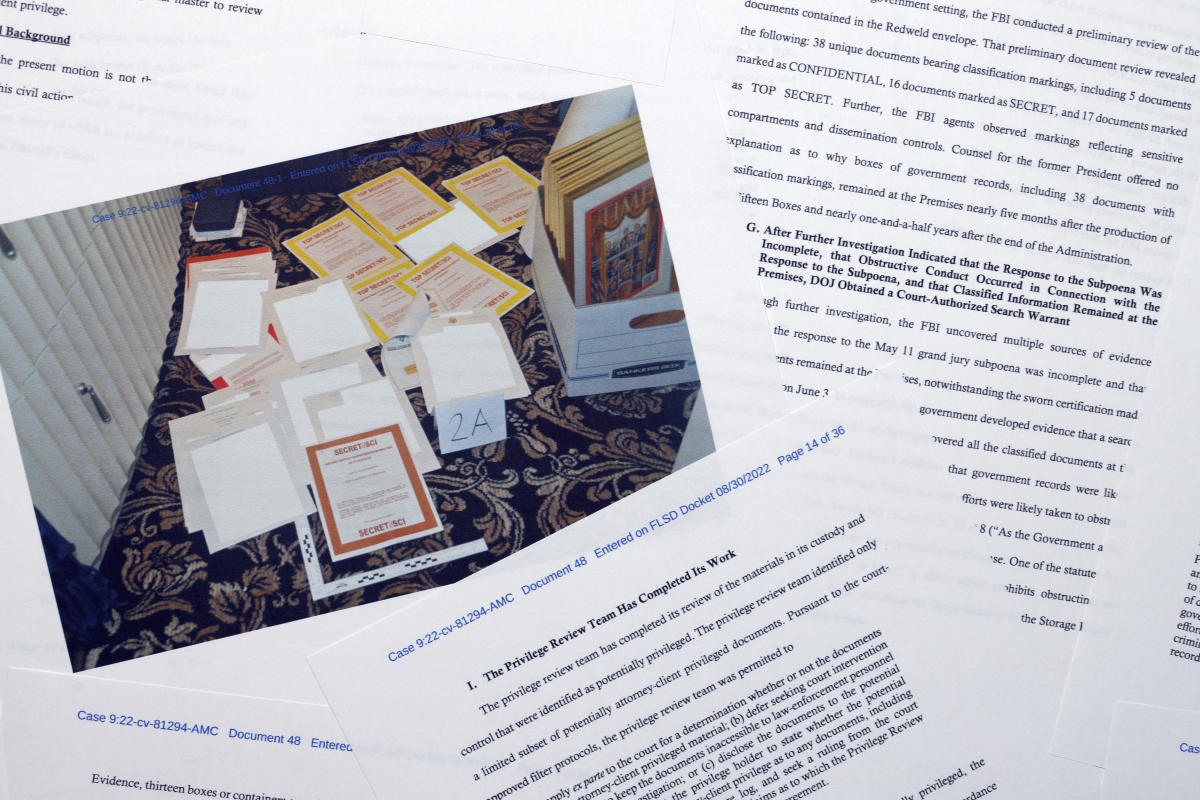 WASHINGTON (AP) — At first, Republicans were highly critical of the FBI search of Donald Trump’s Mar-a-Lago resortbut as new details emerge about the more than 100 classified documents the former president haphazardly stashed at his private club Republicans have grown remarkably silent.

The deepening investigation into Trump’s handling of sensitive government information has disclosed damaging and unsettling new details. With every court filing there is new information about the cache of documents the former president took with him from the White House and the potential national security concerns. While the unprecedented search has galvanized many Republicans to Trump’s defense, others in the party are unwilling to speak up, often wary of crossing him.

Senate Republican leader Mitch McConnell declined to respond Wednesday when asked about the latest developments in the Justice Department’s probe.

“I don’t have any observations about that,” McConnell told reporters in Kentucky.

The silence speaks volumes for a party whose president won the White House after rousing voters in rally chants of “Lock Her Up!” Trump pilloried Democratic opponent Hillary Clinton for using a personal email account and server during her time as Secretary of State. She quickly complied with investigators and was not charged.

The investigation also is posing a new test of Republican loyalty to Trump from lawmakers who are relying on him for their political livelihoods, particularly ahead of the midterm elections.

Battle lines among Republicans infighting over Trump quickly emerged Wednesday after the latest court filing, in which the Justice Department said that the FBI’s Aug. 8 search had produced more than 100 documents with “classified markings” at Mar-a-Lago — twice as many as Trump’s team had turned over earlier this summer.

In Tuesday’s late filing, the Justice Department laid out in stark detail how it had developed evidence “that government records were likely concealed and removed” from a storage room at Trump’s Mar-a-Lago.

The filing described the lengthy process of trying to retrieve government documents taken when Trump left the White House in early 2021. The Justice Department explained how Trump’s legal team had said documents were only kept in the storage room, but the search also found documents in the former president’s office. It said some of the newly found documents were so sensitive that even Justice Department attorneys and FBI counterintelligence personnel required additional clearances before they could review the material.

The Justice Department said “efforts were likely taken to obstruct the government’s investigation.” It produced a photograph of some of the classified documents found, as evidence. The filing said flatly that the government believes “obstructive conduct” has occurred.

Republican Rep. Liz Cheney — one of the former president’s fiercest critics, who recently lost her own primary for reelection — tweeted the photo: “Yet more indefensible conduct by Donald Trump revealed this morning.”

But Republican Sen. Ted Cruz, once a rival to Trump for the White House, has saved his criticizing for federal law enforcement as he defended the former president.

“The FBI’s raid was a horrific ‘abuse of power,'” Cruz tweeted just before the Tuesday filing. He said “there needs to be ‘a complete housecleaning’ at FBI.”

He was among several Republican lawmakers and congressional candidates who were fundraising this week off their complaints about the Justice Department. Cruz’s office did not respond to a request for fresh comments Wednesday.

The Texas senator is not alone in turning his criticism away from Trump and onto the federal authorities conducting the investigation and search. The Republican Party that once stood for law and order has been cleaved by Trump’s actions, some in the starkest, most alarming tones.

In the immediate aftermath of the search, Republicans largely rallied around Trump and demanded more information from the Justice Department. House and Senate Republicans, and some Democrats, sought hearings and briefings.

But as new information emerges, including the court’s release last week of the federal affidavit supporting the search and Tuesday’s Justice Department filing, it may make it more difficult for Trump’s allies to defend the former president and his team’s actions.

Some Republican supporters of Trump focused on the photograph of classified documents included as evidence in the Justice Department filing. Although the documents were shielded, the critics suggested that if the information was so secret it should not have been publicly released. “You people are so bad at this,” tweeted Trump ally Rep. Marjorie Taylor Greene, R-Ga., directing her criticism as much at Democrats and those sharing the image.

The risks of the heated rhetoric against the nation’s law enforcement have been made clear. A police shooting of a man who tried to breach the FBI’s Cincinnati field office showed the danger. FBI Director Christopher Wray criticized those attacking the agency and urged agents to be cautious in public.

Ahead of the midterm elections, Trump’s ability to dominate the political stage is welcomed by House Republicans who are relying on his presence to bolster voter enthusiasm and turnout as they try to win back majority control. Some have encouraged him to quickly announce his own campaign to run again for the White House.

Senate Republicans, however, are growing concerned that Trump is stealing the focus away from what they would prefer to be an election referendum on President Joe Biden’s performance in the White House.

As Biden steps up his own efforts to help his party retain control of Congress, he is focusing on Trump-styled candidates in the Republican ranks, with a more aggressive tone and an emphasis on the risks to democracy that have become a motivating issue for Democrats .

“What is most striking are the facts outlining how the former president and his team knowingly put our national security at risk,” Schiff wrote on Twitter.

The congressman, who led Trump’s first impeachment, urged the Justice Department to continue its probe and “follow the facts.”