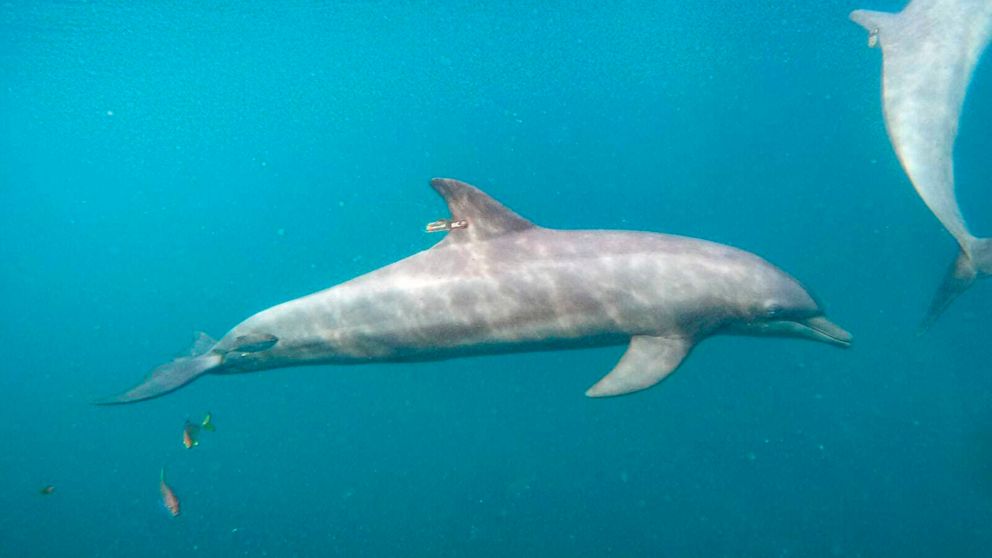 TOKYO — Three bottlenose dolphins were released into the open sea in Indonesia Saturday after years of being confined for the amusement of tourists who would touch and swim with them.

As red and white Indonesian flags fluttered, underwater gates opened off the island of Bali to allow Johnny, Rocky and Rambo to swim free.

The trio were rescued three years ago from their tiny pool in a resort hotel to which they had been sold after spending years performing in a traveling circus.

They regained their health and strength at the Bali sanctuary, a floating pen in a bay that provided a gentler, more natural environment.

Lincoln O’Barry, who worked with the Indonesian government to set up the Umah Lumba Rehabilitation, Release and Retirement Center, said dolphins are wild animals that should live free.

“It was an incredibly emotional experience to see them go,” O’Barry said.

The center was initiated in 2019 by the Bali Forestry Department and the Indonesian Ministry of Forestry. “Umah lumba” means “dolphin” in Indonesian.

For some time after the gates opened, the dolphins looked at the opening, uncertain of their next move. But after about an hour, they were on their way, sometimes jumping over choppy waves.

The Associated Press watched their release through an online livestream. O’Barry is documenting the release with drones and underwater footage for a film.

The Indonesian government supported the dolphins’ rescue, working with the Dolphin Project, founded by Lincoln’s father Ric O’Barry, who was also at the release.

Ric O’Barry had been the dolphin trainer for the 1960s TV show “Flipper,” but later came to see the toll exacted on the animals. He has since devoted his life to returning dolphins to the wild.

Center workers clapped as the dolphins swam out. Wahyu Lestari, rehabilitation coordinator at the center, said she was a bit sad to see them go.

“I’m happy they are free, and they are going back to their family,” she said. “They should be in the wild because they are born in the wild.”

The freed dolphins will be monitored out at sea with GPS tracking for a year. They can return for visits to the sanctuary, although it’s unclear what they will do. They may join another pod, stay together, or go their separate ways.

Dolphins in captivity are carted from town to town, kept in chlorinated water, held in isolation or forced to interact with tourists, often leading to injuries.

Johnny, the oldest dolphin, had teeth that were worn down to below the gum line when he was rescued in 2019. Earlier this year, dentists provided him with dolphin-style dental crowns so that he can now clamp down on live fish.

Johnny was the first of the three dolphins to swim out to sea.

Ric and Lincoln O’Barry have spent half a century working on saving dolphins from captivity in locations from Brazil to South Korea and the US Saturday’s release was their first in Indonesia.

The Indonesian government’s decision to rescue the dolphins followed a decade-long public education campaign that included billboards, artwork, school programs and a drive asking people not to buy tickets to dolphin shows.

A government minister was on hand to raise the gate at the sanctuary Saturday.

Lincoln O’Barry said the Indonesian sanctuary will continue to be used for other captive dolphins. Similar sanctuaries are in the works in North America and Europe, as more dolphin shows close. With virtual reality and other technology, appreciation of nature does not have to involve a zoo or a dolphin show, he said.

Yet dolphin shows are still popular in China, the Middle East and Japan.

In Japan, the father and son have drawn attention to the dolphin hunt in the town of Taiji, documented in the 2010 Oscar-winning film “The Cove.” Every year, fishermen frighten and corral dolphins into a cove, capture some to sell to dolphin shows and kill others for food.

Whale and dolphin meat is considered a delicacy in Japanese culinary tradition. But Taiji has prompted protests by conservationists for years, including some Japanese.

The three dolphins released in Indonesia were soon miles (kilometers) away in the waters. But before their departure, they circled around the sanctuary.

“They turned back around and came back to us one more time, almost to say thank you and good-bye. And then they headed straight out to the open ocean and disappeared,” Lincoln O’Barry said.

“Where they head next, we don’t know. But we wish them a good long life.”