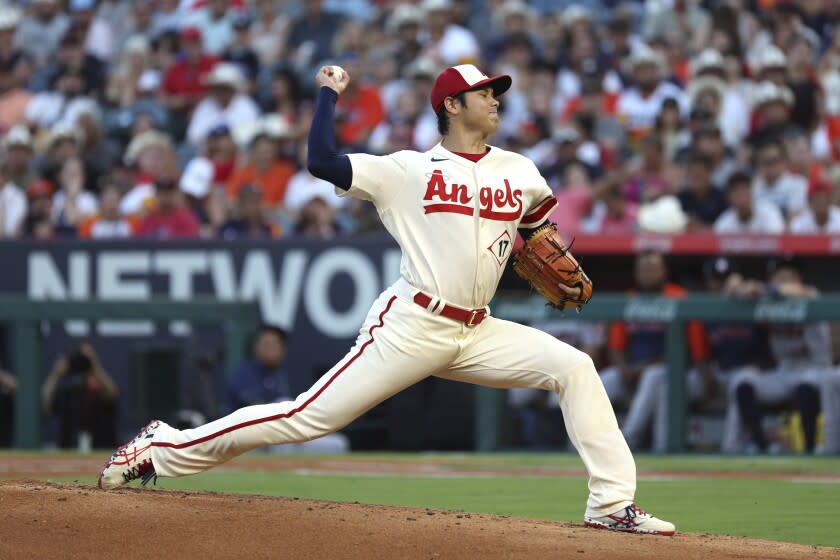 Shohei Ohtani shut down the Houston Astros the last time he pitched against them on July 13. During that game, he struck out 12, giving up an earned run on four hits and two walks.

On Saturday, in front of an announced crowd of 38,244 at Angel Stadium, and with a slightly different list of players in the lineup, he put up another solid performance without the flair of double-digit strikeouts. Ohtani gave up one earned run on six hits and hit one batter with five strikeouts over eight innings in the Angels’ 2-1 win over the Astros in 12 innings. Matt Duffy hit an RBI single that drove in Taylor Ward and ended the extra-inning marathon.

Ohtani set a career high in innings pitched (136), eclipsing his previous mark of 130 1/3. He lowered his earned-run average to 2.58 and increased his strikeouts to 181, both of which are fifth in the American League.

“He was incredible,” Angels interim manager Phil Nevin said of Ohtani after the game. “When he’s in a groove and he knows he’s in a groove, it’s like Larry Bird in basketball or Magic or Jordan.”

Ohtani also got some help with some key defensive assistance in the outfield.

In the first inning, newcomer Ryan Aguilar and Taylor Ward got Ohtani two outs on back-to-back fly balls that Aguilar and Ward needed to slide to catch. In the second, shortstop Andrew Velazquez threw out fast-moving Christian Vazquez during a close play at first.

It was those kinds of plays, along with three strikeouts, that helped Ohtani keep the Astros from reaching base through three innings. And he was also able to exit his start in a 1-1 game after Aguilar’s sacrifice fly scored Luis Rengifo, who reached on a single earlier in the seventh.

“They have a good lineup one through nine so I was taking each batter one by one,” Ohtani said in Japanese through interpreter Ippei Mizuhara. “I was trying to pitch as long as I could and I feel like I accomplished that.

“Not only the outfielders, but the infielders made great plays behind me, helped me keep my pitch count down, helped me get all the way to the eighth inning.”

Rengifo’s single was one of three hits the Angels mustered before Ohtani’s pitching night was over. David Fletcher was responsible for the other two.

Based on the way the Astros were making contact against Ohtani’s pitches, the hits were bound to fall.

Ohtani started the fourth by striking out Jose Altuve on four pitches. Then Yuli Gurriel hit a grounder that skittered by Mike Ford at first for the first Astros hit of the game. Gurriel was left stranded after Alex Bregman grounded into a double play.

But in the fifth, the Astros strung together back-to-back hits, the first a double by Trey Mancini, and the second a single by JJ Matijevic that scored the first run of the game. There was more trouble for Ohtani in the next inning. Altuve and Bregman both singled off Ohtani, who loaded the bases with two outs after hitting Kyle Tucker in the hands with a pitch.

The inning ended with an easy flyout.

The last time the Astros were in town with Ohtani on the mound, Houston manager Dusty Baker was scouting Ohtani potentially to start for his American League team at the All-Star Game. (Ohtani, of course, did not, preferring to be ready to make the first start for the Angels’ first game after the break.)

“He’s not just an All-Star, he’s a megastar,” Baker said of Ohtani before that game, an Angels 7-1 win in which Ohtani went two for four with two RBIs. “He’s one of the top offensive players and one of the top pitchers. And he’s smart — I can tell the way he plays the game that he’s not only talented, but he’s smart.”

Michael Lorenzen had his last rehab start Friday at low-A Inland Empire with the goal of upping his pitch count close to 90.

He finished his outing after throwing 86 pitches over six innings, giving up two earned runs on four hits, two walks and one hit by a pitch. He struck out five.

His next start will be off the injured list and back with the big league club. Lorenzen has been on the IL since July 7 with a right shoulder strain.