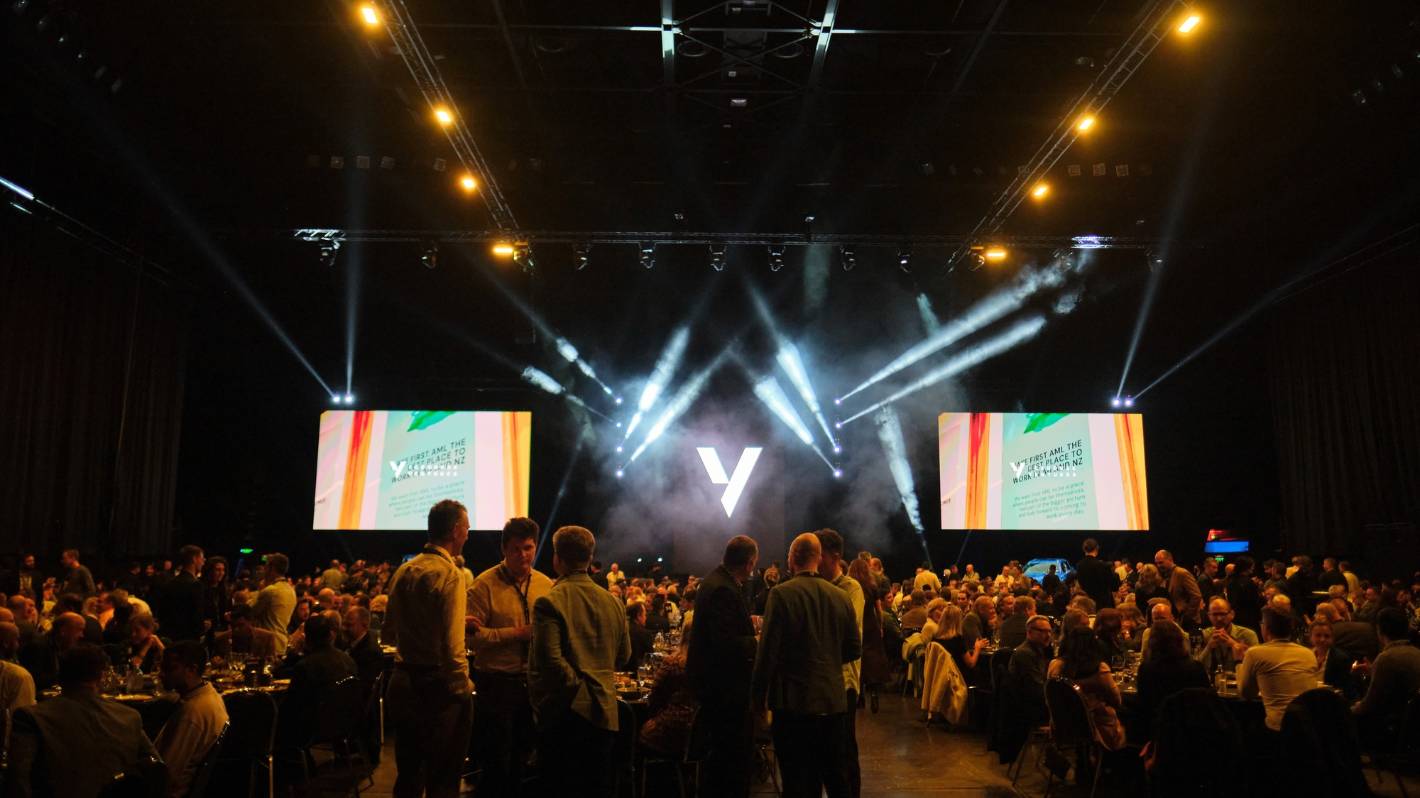 At Spark Arena on a Thursday night in August about 900 people were lapping up the optimism – eating and drinking while listening to investment pitches that were accompanied by a near-continuous stream of smoke, hype and Coldplay.

The Icehouse Ventures Showcase is supposed to drive investment into some of New Zealand’s most promising startups.

It is also supposed to be held annually, but Auckland has been locked down every August for the past two years so Icehouse chief executive Robbie Paul was just pleased to be running an event that wasn’t being unexpectedly held in front of a webcam.

“I understand why it’s easy to feel weary about the future when you’re reading the news about politics, about the environment, about the markets, about the All Blacks sometimes,” Paul told the audience.

READ MORE:
* Silicon Valley of the South Pacific: Grand dream or pipe dream?
* The future of Aotearoa’s economy depends on startups
* How to pick a ‘unicorn’ and what it takes for a startup to become one
* Iconic companies emerge out of every major crisis – so it will be with Covid-19

“But I don’t believe that that should diminish the belief about the force for good that is entrepreneurship and the amazing ability for Kiwi founders to define the future.”

For some of the most promising startup founders, this is the first time they have seen a bear market.

On stage, entrepreneurs were unceasingly optimistic, but backstage some, like Crimson Consulting chief executive Jamie Beatonacknowledged there were storm clouds on the horizon.

“For many founders today it’s the first time we’ve lived through a serious, or potentially risky, bear market.”

“We keep saying if we started raising money six months ago we probably would have had a much easier ride.

“Because when we were presenting this to some investors [more than six months ago] they were like ‘oh this is great’ … then it started to turn, and they were still super-interested, but now they were saying due diligence is going to take a lot longer,” she said.

HeartLab chief executive Will Hewitt, whose company is based on the idea of ​​running a cloud-based system for heart scans, said things started turning late last year.

“Financials, and being a financially viable company, is a lot more important now than it was.”

The tech-heavy Nasdaq stock exchange, which sets the global tone for the attractiveness of tech investments, fell 30% in the first six months of this year.

Meanwhile, the even frothier special purpose acquisition company market in the United States, which once pumped out eye-watering multibillion dollar valuations didn’t have a single new issuance in July.

But to step inside Icehouse’s annual showcase was to be transported to a world without bear markets, inflation, or even Covid-19.

The founders making the presentations were often in their twenties, meaning some were in primary school when the global financial crisis hit and others were not even alive when the dot-com bubble burst.

However, that doesn’t mean they haven’t thought about how they might weather any oncoming economic storm.

KiwiFibre Innovations co-founder Ben Scales said the plan was his product, something he believed there would always be demand for, recession or no.

He and co-founder William Murrell have developed a flax-based material that is a replacement for fiberglass.

Scales is confident demand will not dry up because certain products can never be built without fiberglass, and the flax product they have developed is a low-emissions alternative for the carbon conscious.

To prove their product was up to the job of replacing fiberglass KiwiFibre sent a satellite manufactured out of their flax-based material into space.

The experiment worked, and Scales said they were on the cusp of bringing a major US customer onboard who wanted to buy thousands of meters of KiwiFibre a month.

“They could go bust, yeah, but our material satisfies them just as much as it satisfies the next customer, so the risk is spread quite evenly.”

Others, like Tracksuit founder Conor Archbold, have taken a more revenue-focused approach to their finances, which he believes will help it weather investor nervousness in an industry where annual revenue can sometimes be the last consideration.

“It’s not my first startup, and I’ve been in startups that needed venture capital every 18 months. I’ve done that dance, and we set out this time to build a cashflow positive business.

“We didn’t know there was going to be a recession when we did that, it was sort of an experiment of like ‘is this something you can do.’

“And it worked out really well because right now investors are worried.”

Tracksuit is supposed to solve a problem that probably has its origins at startup events where investors pile into digital marketing companies.

Now those companies are in trouble because of the “cookiepocalypse”, where tech giants like Google and Apple have effectively promised to strip away access to the customer behavior data that these companies use to sell products.

Archbold said his company’s approach had been to revisit what marketers were doing before the digital marketing revolution took over, and then digitize those methods.

“Companies that have grown up during the rise of digital commerce have largely overinvested in Facebook and Google ads, and underinvested in brand and building awareness.

“This has led to immense but fragile growth underpinned by millions of dollars spent monthly on converting digital marketing … these companies are finding themselves in real trouble.”

Investors at events like Icehouse Ventures Showcase often come prepared to lose their money. The tech “startup” revolution that started in Silicon Valley is as much a revolution in finance as it was in technology.

Over decades the Valley has managed to support highly experimental ideas by providing funding in rounds, from the seed foundation stage through to series A and several letters of the alphabet after that.

Each funding round a percentage of a company is sold off. If a company shows promise then the price demanded per share should go up as it gets more funding, this drives up the company’s value.

So those who get in early, like at the Icehouse Showcase stage, reap the biggest rewards.

However, if the idea fails, there are unlikely to be any assets to pick over afterwards to recoup the investment.

These companies are fueled by ideas and people, so if those fail, or leave, then there is no company.

Paul said the average amount an investor puts down on a company was $20,000. Which was a lot of spare change, but comparatively not so much in a city where the median house price ran to over $1 million.

“It’s very risky, relative to most things, to just take money and put it in a single company,

“But keep in mind that most people are not doing that, they’re investing a very, very small portion of their wealth – like typically 1 to 2% – over a number of years into 10 or 20, or even 100 companies.”

Susie Gibbs is a sheep and beef farmer and one of the smaller investors at the showcase on Thursday night.

She turned up intending to watch rather than invest, but the story behind a couple of startups caught her eye, one of them was Kitea Health and a presentation made by Lopez.

Lopez agonized over the presentation, practicing for it over and over again, and going to everybody she could think of for feedback.

The difficulty was finding a way to explain her company’s product in five minutes.

That product deals with hydrocephalus, a buildup of fluid deep within the brain, but it doesn’t aim to cure the illness so much as help monitor whether something is going wrong.

But Lopez could not just explain the condition, she then had to go a step further and establish for investors how this product would be useful for a lot more than helping with the treatment of one condition.

“This is a complex product, it’s a complex condition that we’re targeting, and to get that all in five minutes we had to be really careful with the words that I wanted to really use and the message that we wanted to get across. “

Then again, Paul noted that one of the unique things about startup investing was that if you could easily understand an idea then it probably wasn’t a very lucrative opportunity.

“If the market is so obviously large and accessible, and you can sell to them economically and profitably, if that’s obvious, then the investment opportunity is probably not that real.

“Because everybody can see that, and everybody will enter the market and go for it,” Paul said.

But it sometimes helps to have a product investors can relate to. For example, Gibbs first got started with an investment in Halter because she was attracted by how the product aimed to bring new technology to farming.

Halter allows farmers to control their animals remotely through a collar attached to their necks.

“I thought farming was not embracing very modern techniques, so I thought you should champion somebody who is going for a modern approach,” Gibbs said.

“I just thought, good on them.”