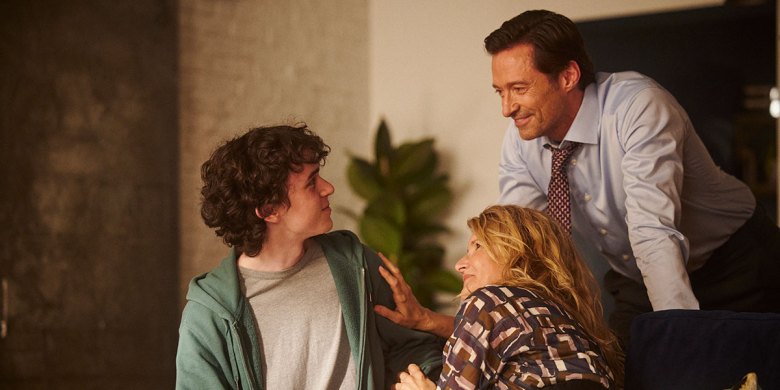 Florian Zeller doesn’t make films, he makes birth control at 24fps. Adapted from his play of the same name — and adding rich cinematic dimensions to the text’s ingenious structural conceit — Zeller’s brilliant and unsparing “The Father” shook people for how it simultaneously conveyed the confusion of suffering from dementia, and the heartache of losing a loved one to it. His follow-up his, which similarly originated on the stage, makes the writer-director ‘s shattering debut feel like a “Paddington” movie by comparison (in terms of depressiveness and quality, alike).

Lacking any of the puzzle box magic that allowed Zeller’s previous film to rescue profound traces of humanity from the massacre of its mental illness, “The Son” offers a stiff and straightforward family portrait that emphasizes the senselessness of depression through the simplicity of its plot. Is it an unusually honest portrayal of parental helplessness in the face of a devastatingly cruel disease, one that may provide some measure of solace to people who’ve been cursed to live with unfathomable guilt over something they had little power to prevent? Some major contrivances and a complete lack of medication notwithstanding, I fear that it is.

At the same time, however, “The Son” is also so pornographic in its pain (and so utterly bereft of air or lightness) that it can’t help but feel like an argument against having children in the first place. What joy could possibly be worth such agony? How are parents supposed to accept that loving their kids may not always be enough to save them? These are brave and valid questions for any film to ask — “Better to see something in a dark light than to not see it at all,” one character rightly insists — but Zeller frames them in such clumsy and stilted fashion that love ends up seeming more like a liability than a reason to live.

Excellent in a film that makes great use of his preening vulnerability, Hugh Jackman stars as Peter, the kind of father who many dads in the audience may find all too relatable. I mean, who among us hasn’t divorced Laura Dern (similarly fantastic as the frustrated Kate), remarried the much-younger Vanessa Kirby (strong but sidelined in the role of Beth), and raised an infant with her in the spacious Manhattan apartment we pay for with our elite lawyer’s salary? No, Peter is so uncomfortably familiar because of his pain determination to give his teenage son — a souvenir from the Kate years — all the love that his own father never showed him (“The Father” is played by a prickish Anthony Hopkins, stopping by for a one-scene cameo that briefly and erroneously hints at some kind of shared Zeller Cinematic Universe).

Easier said than done. In fact, we sense that Peter’s “failure” with Nicholas may have played a role in his decision his to create a new family and start over from scratch. Played by Zen McGrath, a young newcomer stranded in the role of a recessive non-character who seems more like a generic archetype of teenage depression than he does his own human being, 17-year-old Nicholas is no longer the same bundle of wide -eyed joy that Peter so fondly remembers raising as a child. He’s been sulking in his room his, skipping school every day for the last month, and frightening Kate to the point that she insists he go live with Peter, Beth, and baby Theo for a while.

The situation isn’t exactly improved by the change of scenery. It’s bad enough for Peter that Nicholas remains despondent, and that he makes Beth nervous with his benign incel energy — we suspect this isn’t the kind of movie that will go full “We Need to Talk About Kevin,” even if it proves hard to relax after that errant mention of an antique rifle in the first act — but worst of all is how living with his oldest son forces Peter to confront his own guilt, and feel the strain of being a father and child at the same time.

Even at its most airless (a purgatorial register that Zeller settles into from the start), “The Son” resonates with uncomfortable truths both large and small. Infusing the part with just enough clueless vanity to make Peter seem like a life-sized Gregory Peck, Jackman mines real tragedy from the myopia of his character’s logical approach to an illogical problem.

Many of the movie’s early scenes are rich with the stonewalled frustration of a parent trying to decipher their child’s mindset from the hieroglyphics of slammed doors and mumbled conversations. Peter assumes that Nicholas ‘depression must have something to do with his love life his, and he does n’t know where to turn after that; for all the stone-cold severity of Zeller and Christopher Hampton’s screenplay, no movie has ever so effectively dramatized how parents rely on their children’s schoolwork as a measure of their own success.

And yet, “The Son” is too suffocated by the severity of its writing and the sterility of its environments for the film’s characters to grow beyond the scenarios they represent. Yes, depression is a soul-sucking monster of a mental illness, and it’s admirable that Zeller would rather be turgid and broadly truthful in his depiction of it than riveting and harmfully false, but depriving Nicholas of any identifiable traits beyond his disease becomes artificial on its terms, and — callous as it feels to admit — makes the character far more annoying than he needs to be in order to frustrate his parents.

Similarly enervating is Zeller’s decision to trap the kid in such a drab and colorless world, which rings false in a film that eschews the degree of subjectivity that defined “The Father” (a strange choice, considering this story’s focus on how difficult it can be to reconcile the overlapping and often conflicting responsibilities the people in a family might feel towards each other). If Peter and Kate constantly find themselves caught off-balance, the audience spends every minute of this movie waiting for the other shoe to drop, and this time around there isn’t a formal structure to help seize on that schism. The one moment of levity — an impromptu family dance sequence that’s set to a Tom Jones classic — doesn’t feel like anything so much as the obligatory scene of forced happiness in the sad movie where everything goes to shit. Not even Hopkins’ appearance cuts deep enough to draw blood, even if it’s necessary to establish the hereditary kinds of hurt that Peter is so afraid of passing down to his own son.

The full extent of that hurt isn’t revealed until the final 25 minutes or so, which makes for the single most sadistic ending to any movie this side of Lars von Trier’s “Antichrist.” It’s not what happens that’s so punitive, necessarily — in broad strokes, “The Son” couldn’t build to any other conclusion — but rather how Zeller rubs his characters’ faces in it, and ours as well along with them. While there’s great value in a film so willing to confront the terrible fact that love isn’t always enough, “The Son” doesn’t know how to do that without spiting us in the process, delivering sucker-punch after sucker-punch until the poignancy of Peter’s helplessness is canceled out by the deviousness of Zeller’s control.

I can’t remember the last time I cried so hard, or resented every tear that I shed. I raced home to hug my own son as soon as this movie was over, relieved that he’s still only two, but also more terrified than ever that he wouldn’t stay that way. As I wrapped my arms around his little body his and lifted him into the air, I found myself questioning whether today’s unfathomable joy could possibly be worth tomorrow’s potential heartache. It’s a doubt that every parent experiences at one point or (and) another, but also one that left me immensely grateful I didn’t see this movie yesterday.

“The Son” premiered at the 2022 Venice Film Festival. Sony Pictures Classics will release it in theaters on Friday, November 11.

Sign Up: Stay on top of the latest breaking film and TV news! Sign up for our Email Newsletters here.