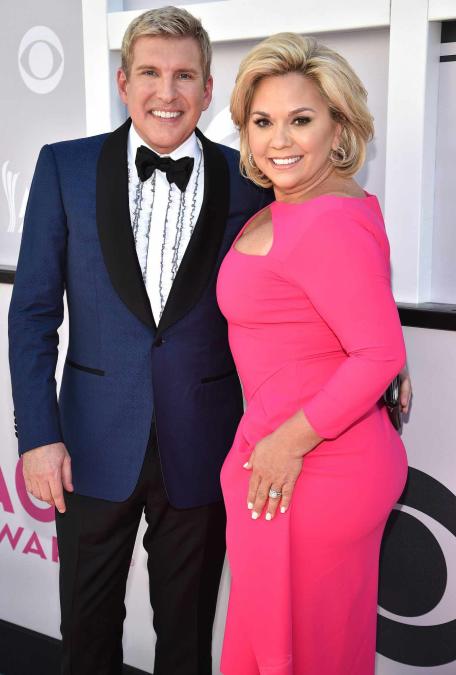 Todd and Julie Chrisley‘s sentencing date has been pushed back.

The Chrisley Knows Best stars, who were first set to be sentenced on Oct. 6 after being convicted of fraud charges, will now be sentenced on Nov. 21, according to a new document obtained by PEOPLE.

“The Government does not object to this request,” reads the paper, which also lists the pair’s former accountant Peter Tarantino as a defendant. “For good cause shown, the Court GRANTS this motion.”

In June, a federal jury found Todd, 53, and Julie, 49, guilty of conspiracy to commit bank fraud, conspiracy to defraud the United States and tax fraud, per the Atlanta Journal-Constitution. Julie was also convicted of wire fraud. (The pair have denied all the charges.)

However, in August, court documents filed in the US District Court for the Northern District of Georgia’s Atlanta Division and shared with PEOPLE indicated that the pair had filed a joint motion for a new trial through their lawyers.

The motion alleged “the government presented and failed to correct false testimony from IRS Revenue Officer Betty Carter, who lied about the Chrisleys owing taxes or years when she knew no taxes were due.”

“This testimony had the effect of falsely painting the Chrisleys as untruthful, likely to commit other forms of fraud, and evading the tax payments alleged in the indictment,” the motion read.

It also accused the court of accepting evidence that violated Todd and Julie’s Fourth Amendment rights “even though this evidence had been suppressed under this Court’s prior rulings, without requiring the government to make any showing at all that the evidence should not be excluded.” (Under the Fourth Amendment, citizens are protected from searches and seizures from the government that are deemed irrational.)

RELATED: Todd Chrisley and Family Are ‘United and Standing Firm’ Against Critics Amid Legal ‘Ordeal’

Todd and Julie were convicted on all counts in a federal court in Georgia on June 7. The pair now faces up to 30 years in prison. Tarantino was also found guilty of conspiracy to defraud the United States and willfully filing false tax returns, according to Insider.

During their three-week trial, Assistant US Attorney Annalize Peters claimed that Todd and Julie submitted false documents exaggerating their wealth to banks to borrow over $30 million that they “burned” on their affluent lifestyle while additionally hiding money from the IRS.

“They made up documents and they lie through their teeth to get whatever they want, whenever they want it,” Peters told the jury, per Insider.

Todd’s attorney, Bruce H. Morris, blamed the couple’s former employee, Mark Braddock, for impersonating Todd and committing the fraud behind the couple’s back, reportedly turning on them after he was fired in 2012. Despite Peters deeming Braddock a “fraudster,” she noted that the couple continued the act even after ties with him were cut.

Tarantino’s attorney said that his client was “in over his head” and unqualified to handle the Chrisleys’ finances — noting that he “failed the CPA exam many times over 20 years,” the outlet reported. Despite his lack of qualifications, his attorney noted that Tarantino is not a criminal.

RELATED VIDEO: Todd and Julie Chrisley Found Guilty of Bank Fraud and Tax Evasion, Face Up to 30 Years in Prison

Todd has previously opened up about the “employee” who allegedly wronged them in the fraud and tax evasion suit on their joint podcast.

“We had this employee that worked for us, that has caused so much of the stuff that has happened, and you look and say, ‘How is he getting away with this? How is this happening?'” Todd said. “I have prayed for God to take that hatred out of my heart because I know what this man did. Just because I don’t know what’s going on in his life doesn’t mean God’s not handling it … I just pray, Lord if there’s an enemy coming at me and whatever they’re sending my way, I ask that you return to sender.”

“People will get what’s coming to them, but it’s in God’s time,” Julie later added. “It’s not on our time. That’s where we want to push it along, we want to hurry it up because we’re hurting so badly that we just want to see an ounce of love from someone else because we feel like we’re hemorrhaging .”

Never miss a story — sign up for PEOPLE’s free daily newsletter to stay up to date on the best of what PEOPLE has to offer, from juicy celebrity news to compelling human interest stories.

The duo also admitted on their podcast in July that the situation had taken a toll on their family — but they were determined to push through.

“As a family, we are still united and standing firm in our positions and in our faith. We don’t waive in our faith,” Todd said. “Now listen. Are we disappointed? Are we hurt? Yes, but we know that God has a purpose for everything.”