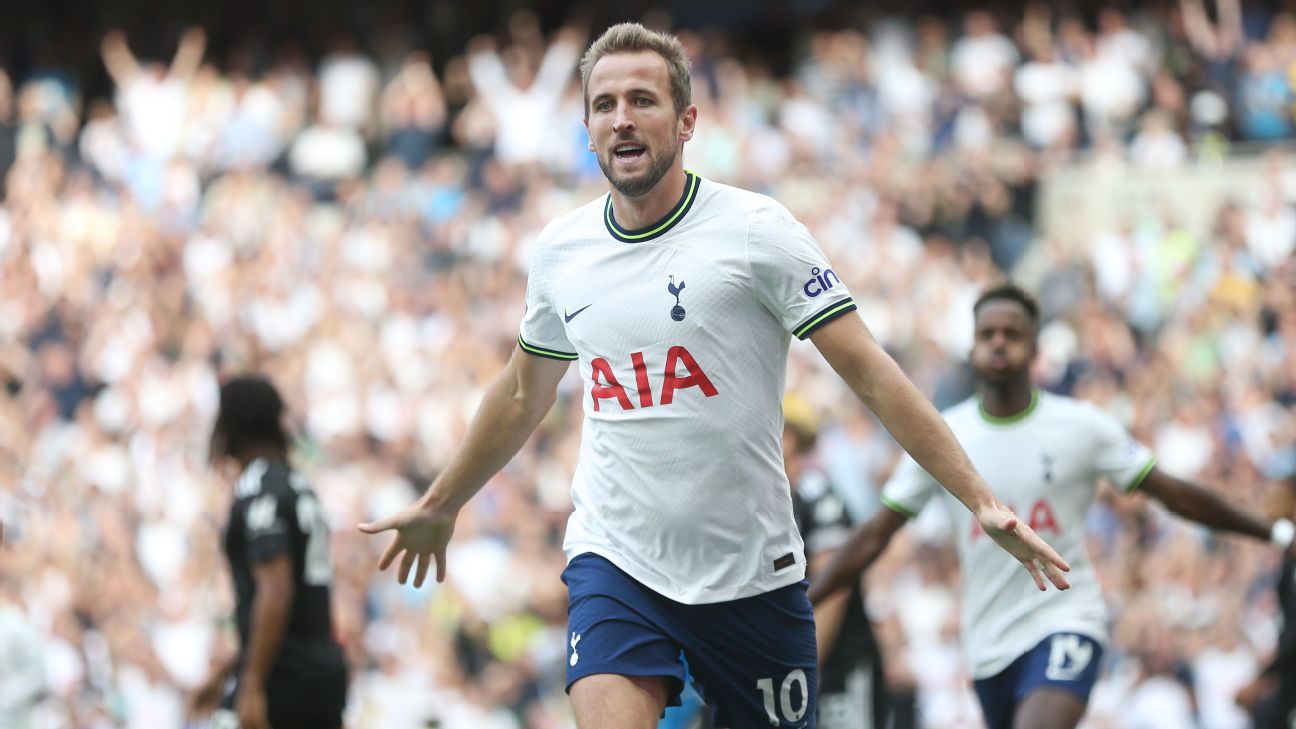 Harry Kane moved into outright third on the all-time Premier League goal charts by scoring in Tottenham Hotspur’s 2-1 win over Fulham on Saturday.

The England captain’s fifth goal of the season moved him past former Manchester United striker Andy Cole (187) on the list of players with the most goals scored since the English top flight became the Premier League in 1992.

As such, Kane can now set his sights on the second-placed Wayne Rooney, who scored a total of 208 goals in 491 Premier League games for Everton and Manchester United during his career. Newcastle United legend Alan Shearer is still way out in front, having topped the Premier League all-time scoring charts for two decades with his grand haul of 260 goals in 441 games.

However, Kane is the only active player in the top 10, meaning that the prolific 29-year-old stands a very good chance of breaking the record before he hangs up his boots — in fact, there’s a distinct possibility he might even go second in the all-time list this season.

How did Kane get here?

Kane has made 288 appearances in the Premier League to date, with 285 of those coming for Spurs and the other three for Norwich City during a loan stint at Carrow Road early in his career.

He made his Premier League debut as an 18-year-old in the 2012-13 season, but only made four appearances overall during the campaign — one for Tottenham and three for Norwich. He then upped that to 10 league appearances and three goals the following season before firmly establishing himself as Spurs’ first-choice striker in 2014-15, at which point the goals began to come thick and fast.

Along with Greaves and Smith, Kane is also the only other Spurs player in history to score more than 200 goals for the club in all competitions — Smith with 208 goals in 317 games, Kane with 252 in 391, Greaves with 266 in 379. Rarified company indeed.

Could Kane catch Rooney this season?

Kane is now poised a mere 20 goals behind Wayne Rooney in the Premier League scoring chart. Given that the former already has five goals in his first six games of the 2022-23 campaign, it looks to be simply a matter of time before he surpasses his old England strike partner.

Indeed, should he maintain his strike rate this season, Kane would match Rooney’s Premier League tally of 208 goals in just 24 games’ time. As things stand with the fixture list, that would coincide with Tottenham’s trip to face Rooney’s boyhood club Everton on April 1.

Of course there are likely to be fluctuations in form to take into account, but all evidence suggests that the 20 goals required to equal Rooney’s haul from this point is a perfectly achievable target for Kane.

With five goals already in the bag, the Spurs striker would need to end the 2022-23 campaign with 25 league goals in total to move level with Rooney — a tally he’s previously reached on three occasions for Spurs. If he can stay fit and his teammates keep supplying him with chances, there’s no obvious reason why he couldn’t reach those numbers again.

When could Kane overtake Shearer?

Kane is creeping ever closer to Shearer in the all-time ranking but still finds himself with a 72-goal gap to close down before he draws level with the Premier League’s greatest-ever goal scorer.

Shearer scored 260 goals in 441 Premier League games before retiring at the age of 35 in 2006, although he also hit the net 23 times in the old First Division in his early days at Southampton before joining Blackburn Rovers in 1992.

It would be some feat, but Kane has been averaging 23 Premier League goals per season since 2014-15. That means just three more seasons of maintaining that rate would see him at least move to within 10 goals or so of Shearer by the start of the 2025-26 season. Kane has time on his side, too, as the 29-year-old could play for six more years before reaching the age at which Shearer retired.

It’s worth noting that Kane commands a slightly higher goal-per-game ratio than Shearer in the Premier League (0.65 to 0.59), another sign that he can realistically aim to claim the record for himself if he chooses not to move abroad in the next few years and stays fit.

Let’s face it, he’s probably got more chance of knocking Shearer off his perch than he has of winning the Premier League title with Tottenham.