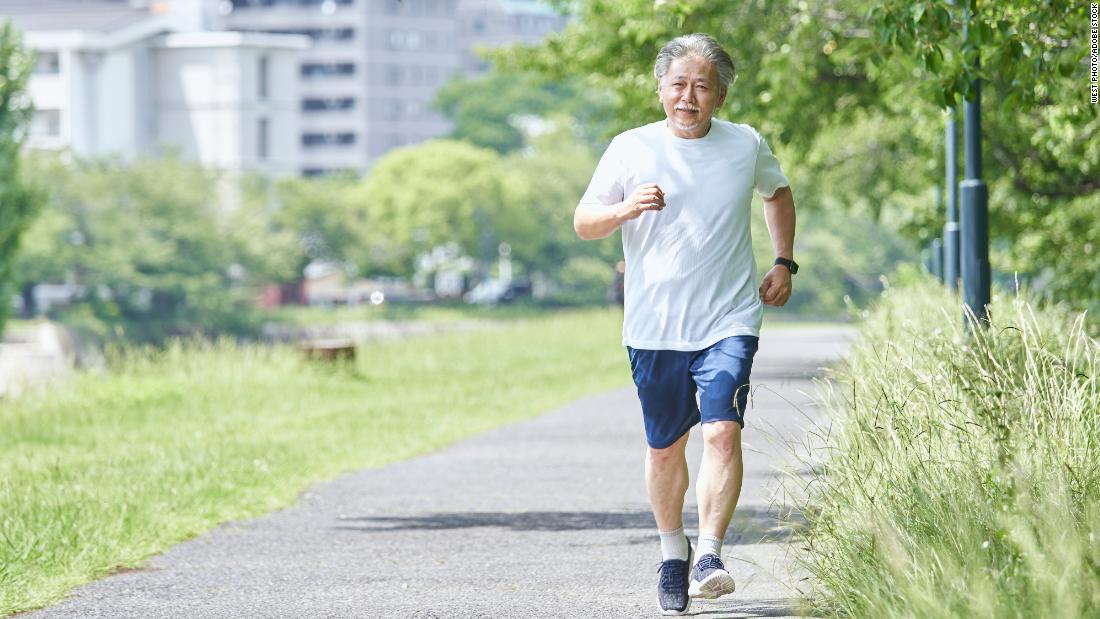 People between the ages of 40 and 79 who took 9,826 steps per day were 50% less likely to develop dementia within seven years, the study found. Furthermore, people who walked with “purpose” — at a pace over 40 steps a minute — were able to cut their risk of dementia by 57% with just 6,315 steps a day.

“It is a brisk walking activity, like a power walk,” said study coauthor Borja del Pozo Cruz, an adjunct associate professor at the University of Southern Denmark in Odense, Denmark, and senior researcher in health sciences for the University of Cadiz in Spain .

Even people who walked approximately 3,800 steps a day at any speed cut their risk of dementia by 25%, the study found.

“That would be enough, at first, for sedentary individuals,” said del Pozo Cruz in an email.

“In fact, it is a message that doctors could use to motivate very sedentary older adults — 4k steps is very doable by many, even those that are less fit or do not feel very motivated,” he added. “Perhaps, more active and fitter individuals should aim for 10k, where we see maximum effects.”

But there was an even more interesting result buried in the study, according to an editorial entitled “Is 112 the New 10,000?” published Tuesday in JAMA Neurology.
The largest reduction in dementia risk — 62% — was achieved by people who walked at a very brisk pace of 112 steps per minute for 30 minutes a day, the study found. Prior research has labeled 100 steps a minute (2.7 miles per hour) as a “brisk” or moderate level of intensity.

The editorial argued that individuals looking to reduce their risk of dementia focus on their walking pace over their walked distance.

“While 112 steps/min is a rather brisk cadence, ‘112’ is conceivably a much more tractable and less intimidating number for most individuals than ‘10,000,’ especially if they have been physically inactive or underactive,” wrote Alzheimer’s researchers Ozioma Okonkwo and Elizabeth Planalp in the editorial. Okonkwo is an associate professor in the department of medicine at the Wisconsin Alzheimer’s Disease Research Center at the University of Wisconsin–Madison; Planalp is a research scientist in Okonkwo’s lab.

“We do agree this is a very interesting finding,” said del Pozo Cruz via email. “Our take is that intensity of stepping matters! Over and above volume. Technology could be used to track not only number of steps but also pace and so these types of metrics can also be incorporated in commercial watches. More research is needed on this. ”

Don’t have a step counter? You can count the number of steps you take in 10 seconds and then multiply it by six — or the number of steps you take in six seconds and multiply it by 10. Either way works. But remember, not everyone’s steps are the same length, nor are their fitness levels. What might be a brisk pace for a 40-year-old may not be sustainable for a 70-year-old.

The study, also published Tuesday in JAMA Neurology, analyzed data from over 78,000 people between the ages of 40 and 79 who wore wrist accelerometers. Researchers counted each person’s total number of steps per day, and then placed them into two categories: Fewer than 40 steps per minute — which is more of an amble, like when you’re walking from room to room — and more than 40 steps per minute, or so-called “purposeful” walking. The researchers also analyzed peak performers — those who took the most steps within 30 minutes over the course of a day (although those 30 minutes did not have to occur on the same walk).

Researchers then compared that person’s steps against their diagnosis of dementia of any type seven years later. After controlling for age, ethnicity, education, sex, socio-emotional status and how many days they wore an accelerometer, researchers also factored out such lifestyle variables as poor diet, smoking, alcohol use, medication use, sleep issues and a history of cardiovascular disease.

The study did have some limitations, its authors point out — it was only observational, so it cannot establish a direct cause and effect between walking and a lower risk of dementia. In addition, “the age range of participants may have resulted in limited dementia cases, meaning our results may not be generalizable to older populations,” the study said.

“Because there are often considerable delays in dementia diagnosis, and this study did not include formal clinical and cognitive assessments of dementia, it is possible that the prevalence of dementia in the community was much higher,” the authors added.

While agreeing that the findings cannot be interpreted as a direct cause and effect, “the mounting evidence in support of the benefits of physical activity for maintaining optimal brain health can no longer be disregarded,” wrote Okonkwo and Planalp.

“It is time for the management of physical inactivity to be considered an intrinsic part of routine primary care visits for older adults,” they added.

Adults who were highly engaged in physical activity such as frequent exercise had a 35% lower risk of developing dementia compared with people who were the least engaged in these activities, researchers found.

Regularly doing household chores lowered risk by 21% while daily visits with family and friends lowered the risk of dementia by 15%, when compared with people who were less engaged.

Everyone in the study benefited from the protective effect of physical and mental activities, whether or not they had a family history of dementia, researchers found.

Another study published in January found that exercise may slow dementia in active older people whose brains already showed signs of plaques, tangles and other hallmarks of Alzheimer’s and other cognitive diseases.

That study found exercise boosts levels of a protein known to strengthen communication between brain cells via synapses, which may be a key factor in keeping dementia at bay.

“Dementia is preventable to a great extent,” said del Pozo Cruz. “Physical activity as well as other lifestyle behaviors such as lack of alcohol and smoking, maintaining a healthy diet and weight and sleep can put you on the right track to avoid dementia.”