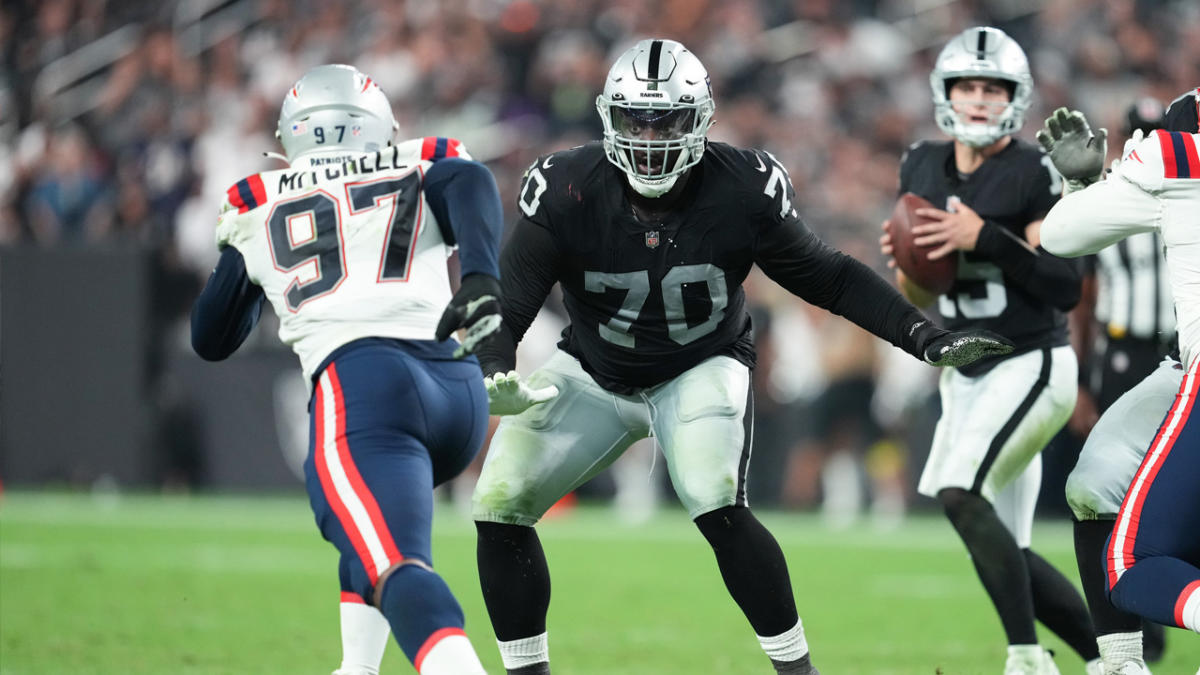 LAKE FOREST – Alex Leatherwood is exactly the type of player the Bears should be looking to add. A former first-round pick in need of a second chance after flaming out with his first team.

On Wednesday, the Bears claimed the former Las Vegas Raiders offensive lineman, promising to give him a fresh start after being unable to live up to his draft slot in Sin City.

“We studied him on tape. We looked at him,” head coach Matt Eberflus said of Leatherwood on Wednesday.

“Some guys have been with him, some guys that were in Vegas last year. We have a couple of coaches on our staff. Of course, I know Coach Marinelli, used him as a resource. We’ve got nothing but good reports, and we’re excited to have him. We’ll see where he goes from here.

Coming out of Alabama, Leatherwood was projected to be a second-round pick who many believed would have to transition to guard at the NFL level. But Jon Gruden and Mike Mayock did what they did so many times in the draft and reached for need, selecting Leatherwood with the No. 17 overall pick in the 2021 NFL Draft.

Gruden and Mayock were adamant that the 6-foot-5 Leatherwood could pair with Kolton Miller to give the Silver and Black bookends for the next decade.

Things didn’t go according to plan.

Leatherwood started his career at right tackle but was one of the worst in the NFL. He played 257 snaps in his first month and earned Pro Football Focus grades in the 30s in three of his first four games.
Eventually, the Raiders kicked him inside to guard, where he found some success.

But new head coach Josh McDaniel and general manager Dave Ziegler arrived in the offseason and put almost everyone from the Gruden-Mayock regime on notice. McDaniels said during the preseason that Leatherwood needed to focus on technique and fundamentals.

It was a bad sign for Leatherwood’s prospects of sticking around, and his Raiders tenure came to an unsurprising end Tuesday when Las Vegas waived him with three years remaining on his rookie contract.

Eberflus and the Bears were surprised Leatherwood was available on waivers when their turn came around.

It’s no surprise that the Bears were drawn to Leatherwood. He has the pedigree, potential, and road-grading ability to attract general manager Ryan Poles and Eberflus like moths to a flame.

“One of the things when you look at him that stands out would be, number one, his run blocking,” Eberflus said. “His run blocking is really good. He’s got good balance when it comes to that. He stays on guys. That’s what we like about him the most right now. He’s got to develop his game. He’s a young player and we’ve got some really good coaches to help him. Chris Morgan is one of the best line coaches in the NFL. We’re excited to have those guys paired up together.”

The book on Leatherwood coming out of Alabama was that he was a high IQ football player with great instincts, but he would need a coaching staff willing to work with and develop him. Starting right out of the gates should never have been the plan.

But no one told Jon Gruden.

After how Morgan has handled Teven Jenkins and his transition from tackle to guard, it’s not surprising the Bears would be bullish about the prospects of pairing Leatherwood, a highly skilled but raw lineman, with a top-tier teacher.

There’s an NFL-caliber offensive lineman in Leatherwood. The Bears might not get any returns out of him this season. It’s very possible that the rebuilding of Alex Leatherwood will take time, patience, and a lot of sweat in the bucket.

That’s why the Bears elected to claim Leatherwood rather than seeing if he would pass through waivers. By claiming him, the Bears now have Leatherwood under contract for three more seasons and can pick up his fifth-year option if things pan out.

Leatherwood should arrive in Chicago in the coming days and begin his education at the Chris Morgan School of Offensive Linemen.
If Morgan can connect with Leatherwood, give him the right cues, and mold him into an NFL-level pass protector, there’s a chance the Bears will have found a long-term piece of their offensive line puzzle on the cheap.

There was no reason for Poles and Eberflus not to take a swing with the potential for a massive payoff.